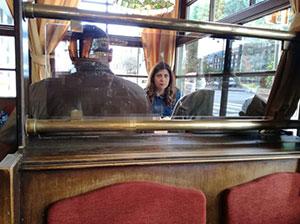 Last July, a botched military coup led to fighting on the streets of Ankara and Istanbul. Quickly peace was restored, the perpetrators were arrested – and a purge began of thousands of people, from judges to teachers, accused of links with the plotters. As Maria Psara in Brussels explains, the purge reached as far as Belgium, where its effects are still being felt.

Sitting at the back of a small cafe in Brussels, the two men were looking around to check whether they had been followed. The two women who accompanied them were silent, waiting for a signal that it was safe to talk.

Ibrahim had already told me that they all feared for their lives.

“The Turkish media call us ‘terrorists’ and say that Turkish or even Russian intelligence should kill us,” he said. “Turkish officials describe us as traitors and advise people to attack us if they meet us.”

A year ago, Ibrahim and Abdullah (not their real names) were high-ranking members of the Turkish military delegation to Nato. Now they are jobless and de facto stateless – two of the myriad casualties of a purge that followed an attempted military coup in Turkey a year ago.

Ayse and Deniz (also pseudonyms) are the wives of two other purged Turkish Nato officers. All their lives have changed dramatically. They have lost their homes and their incomes and may never be able to return to the country of their birth.

After the unsuccessful coup on the night of 15 July 2016, tens of thousands of civil servants, judges, teachers, journalists, and others were arrested, suspected of being followers of Fethullah Gulen, the exiled cleric who is supposed – although he denies it – to have orchestrated the attempt to overthrow Turkish President Recep Tayyip Erdogan.

Among them were hundreds of military officers, but those serving abroad felt safe. It was clear, at least, that they had not taken any active role in the fighting.

“The Turkish army has more than 600,000 personnel,” says Ibrahim. “If an army of this size has decided to carry out a coup, it does not need the few officers it has abroad to execute it. The ones in Turkey would suffice.”

In August, however, lists of names began to arrive in Brussels every Friday after business hours – they were the names of officers who had been suspended or dismissed without explanation.

At the end of September, a long document with 221 names arrived at Turkish missions abroad, including the Nato headquarters in Brussels and in Mons, nearby. In it, the Turkish General Staff ordered the officers to return to Turkey immediately, again without explanation.

Throughout my whole life I have served my country, my flag, and now I have to hide my identityAbdullah, Former Turkish officer

“My name was in the list. We called Turkey in an attempt to understand the accusations against us,” says Abdullah.

“Take the first flight back,” was the only response.

Those who didn’t comply were purged in a decree issued on 22 November, accusing them of links with a “terrorist organisation”, a reference to the Gulenist movement.

Their assets in Turkey were frozen and their passports were cancelled.

By this stage it had long become clear that obeying the summons to Turkey was fraught with danger.

A group of officers who were quick to sell their furniture and their cars, and close their contracts with electricity and gas suppliers, returned in early October and almost all were arrested – some on arrival at the airport, others when they reported to headquarters.

Around the same time, a Navy officer was called from Brussels to an emergency meeting on “standardisation” at the general staff in Ankara.

“Anyone in the armed forces knows that standardisation is not a subject that one would ever classify as emergency. Even though everything about this meeting was fishy, the officer went because there was no reason to be afraid,” says Ibrahim.

It turned out to be a set-up. He was arrested and has been in jail awaiting trial ever since. “Up until now, he has not been informed about any evidence against him,” Abdullah says.

His wife and three children, who were not officially notified of his arrest, remain behind in Belgium, trying to survive without him.

Describing these family tragedies, and their own, the officers and officers’ wives are understandably grim-faced. One story, though, evokes a bitter smile. The men explain that a colleague was involved in a serious road accident in the days before the coup. At the time it happened he was in intensive care in a Belgian hospital. “He was unconscious,” Ibrahim says. But he too was accused of being involved in the coup.

Overall, more than 700 officers out of 950 officers serving at Nato and in Turkish diplomatic missions around the world are estimated to have been purged. Most have applied for asylum in their host countries, and some – in Germany and Norway, for example – have already received it.

Most of the Turkish officers in Belgium were living with their families in military housing. Many were ordered to move out at the end of September, though those in Mons were allowed to stay until the end of the school year, because their children went to school on the base. Some left early anyway, to start adapting to their new life as soon as possible. Others stayed, on the grounds that they had nothing to hide and were not afraid.

Our husbands sacrificed their daily life, their family life for their work – they were married with their work, not with usAyse, Wife of former officer

“However hard the Turkish national military representative tried to make us leave the base and make life harder for us, Nato put up a stance against his illogical arguments,” says Abdullah.

The head of Nato’s allied command headquarters in Mons, Gen Curtis Scaparotti, dismissed the idea that these officers could have been involved in the planning of a coup, Abdullah says. Foreign colleagues tried to help in different ways. Some offered monetary help, others invited the Turkish families to Christmas dinner, some even offered their personal houses in their homelands.

“Unanimously, all advised against going back to Turkey.”

For children, moving from the Nato school to a Belgian school is a huge change. Suddenly, instead of studying in English, they are in an environment where everyone speaks either Flemish or French.

The families have so far been surviving their savings. They will soon need to find work – but they are barred from employment until, or unless, they are granted asylum.

They are also hesitant about leaving the house, afraid of being targeted by pro-Erdogan zealots. More than three-quarters of Turks in Belgium who cast a ballot in a referendum held last April voted in favour of granting sweeping new powers to the president. Clashes between the president’s supporters and opponents, as voting took place, left several in hospital.

Since they were teenagers the officers have been at military schools, and have always been reluctant to express political views. They deny any connection with Fethullah Gulen. At the same time, they are clearly deeply alarmed by the direction President Erdogan is leading the country – away from the West, as they see it, closer to the Muslim world and to Russia.

The role of the Turkish Army as the guardian of a modern secular republic is under threat, they argue, while the purge has resulted in pro-Western officers being replaced with officers who either support political Islam or have a “pro-East, pro-Russia ideology”.

Privately, Nato sources admit that the quality of the new officers is nowhere near that of those who were forced out.

The patriotism of the former officers is visible in their anger.

“See this?” asks Abdullah, showing his passport. “Throughout my whole life I have served my country, my flag, and now I have to hide my identity, although I did nothing wrong.”

“Our husbands sacrificed their daily life, their family life for their work. They were married with their work, not with us,” says Ayse.

Abdullah says his greatest wish for the future is for Turkey to “return to normality” as he puts it.

“To be again a country we would be proud of,” he adds.

Maria Psara is Brussels correspondent for the Ethnos newspaper