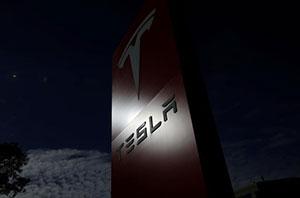 On Wednesday, its shares fell 7.2 percent to $327.09, its lowest in more than a month. Its biggest daily percentage fall since June 22, 2016, followed a 2.5 percent decline on Monday, when first-half deliveries of Tesla electric sedans and SUVs came in the lower end of its forecast.

Tesla said a “severe shortfall” of new battery packs had constrained vehicle manufacturing, and said second-half deliveries of the Model S sedan and Model X sports utility vehicle should exceed those of the first half.

“We see Tesla shares as an over-valued show-me story that has traded as a concept stock given the dislocation between share price performance and our/consensus estimates,” analysts at Cowen and Company said in a note.

Even after the sharp losses, Tesla shares remained up about 53 percent this year.

Even after the two-day slide, the stock remained about 7 percent above the median price target of $309.50. Less than 20 S&P 500 Index constituents can top that.

On average, S&P 500 stocks trade between 7 percent and 9 percent below the Street’s target, according to Thomson Reuters data.

Some 14 of the 21 analysts who cover Tesla have a sell or hold rating on the shares.

Zhejiang Geely Holding Group-owned Volvo said all car models it launches after 2019 will be electric or hybrids, making it the first major traditional automaker to set a date for phasing out vehicles powered solely by the internal combustion engine.

While the Volvo announcement could be seen as validation for Tesla CEO Elon Musk’s vision, it also highlights the intense competition Tesla is likely to face, Barclays analyst Brian Johnson said in a research note.

On Wednesday, Goldman Sachs cut its six-month price target on Tesla to $180 from $190. Andrew Left of short seller Citron Research told CNBC in a phone interview that he thinks that is fair in the short term.