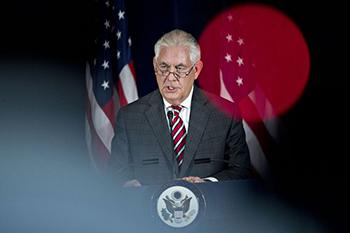 President Donald Trump will raise the possibility of U.S. and Russian cooperation on easing the Syria conflict when he meets his Russian counterpart in Hamburg, Secretary of State Rex Tillerson said.

Tillerson’s statement — coming just two days before Trump and Putin meet in Germany — reflects a U.S. determination to avoid getting too deeply embroiled in maintaining the peace in Syria while also signaling a willingness for improved ties with Russia, which entered the Syria conflict in 2015 on behalf of Syrian President Bashar al Assad. It’s also the most detailed description yet of a topic the two leaders will discuss.

Russia bears primary responsibility for providing for the needs of the Syrian people and for ensuring that none of Syria’s warring factions take territory liberated from the terror group, Tillerson said in the statement. Russia also has an obligation to ensure that Assad’s regime doesn’t use chemical weapons again, he said.

“The United States and Russia certainly have unresolved differences on a number of issues, but we have the potential to appropriately coordinate in Syria in order to produce stability and serve our mutual security interests,” Tillerson said in the statement.

The initiative bears echoes of a proposal circulated under President Barack Obama, when Secretary of State John Kerry and his Russian counterpart, Sergei Lavrov, sought — and ultimately failed — to establish a so-called Joint Implementation Group aimed at easing the conflict enough to pave the way for negotiations for a permanent resolution. Tillerson’s statement, while lengthy, provided no further details of what he called “a topic the president will raise in his meeting with Russian President Putin.”

In remarks to reporters Wednesday night before leaving Washington for Hamburg, Tillerson said the outreach to Russia reflects an “effort that serves both of our interests as well as the broader interest of the international community.”

“But we’re at the very beginning, and I would say at this point it’s difficult to say exactly what Russia’s intentions are in this relationship, and I think that’s the most important part of this meeting — to have a good exchange between President Trump and President Putin over what they both see as the nature of the relationship between our countries,” Tillerson added.

U.S. officials, including Brett McGurk, the U.S. envoy for the coalition to fight the Islamic State, have been quietly meeting with Russian counterparts for weeks to lay the groundwork for such cooperation. The Wall Street Journal reported June 9 that the administration was speaking with Russia to set up a de-escalation zone in southwest Syria.