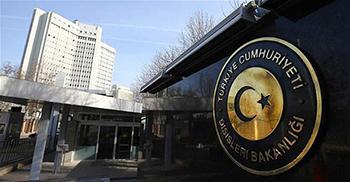 The Armenian army opened fire on the Alhanli village in the Fuzuli region, killing a two-year-old girl and a 50-year-old woman, while injuring another woman, the Azerbaijani Defense Ministry said in a statement.

The Turkish Foreign Ministry also released a statement regarding the attack.
“We wish God’s mercy on our Azerbaijani brothers who lost their lives in this traitorous attack, convey our condolences to their families and Azerbaijani people, and wish a speedy recovery to the wounded,” it said.

The ministry said the “atrocious” event clearly showed that Armenian provocations through the use of heavy weapons in border regions target civilians, especially woman and children, which is contrary to international law and human values.

It said the international community needs to understand the “violence policy” of Armenia that it “consciously and systematically” carries out, the country is the “biggest” obstacle in the settlement of Upper Karabakh dispute through peaceful means.

“Turkey, as a member of the Minsk Group of Organization for Security and Co-operation in Europe [OSCE] that was established for the solution of the Upper Karabakh dispute, will continue to support the efforts to find a just and lasting solution to the dispute within the framework of Azerbaijan’s territorial integrity and sovereignty,” it added.

The OSCE’s Minsk Group on July 5 called on Baku and Yerevan to cease military action.

“Violence only begets further violence and accomplishes nothing. The only responsible and humane way to resolve this long-standing conflict is for the sides to return to the negotiation table in good faith,” it said in a statement.

The two countries remain in dispute over the occupied Karabakh region, which a pro-Armenian militia took over in 1993.

The Parliamentary Assembly of the Council of Europe refers to the region as being occupied by Armenian forces.