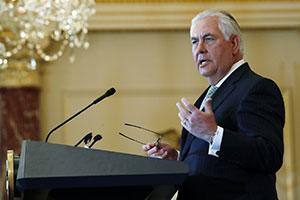 In a statement issued as he departed for Europe, where he will join President Trump in Germany on Thursday, Tillerson said that the United States and Russia have successfully cooperated in establishing deconfliction areas in Syria to avoid contact between their air operations.

Trump plans to meet Friday with Russian President Vladi­mir Putin outside a Group of 20 summit that both are attending in Hamburg. Tillerson’s statement appeared designed to set an agenda for that meeting, framing the discussion in ways that the White House has declined to do in ­public.

In brief remarks at Joint Base Andrews before taking off, Tillerson recalled his own characterization of U.S. relations with Russia as being “at a very low point.”

“We’re at the very beginning,” he said of Trump’s first face-to-face meeting with Putin, and “at this point it’s very difficult to say what Russia’s intentions are in this relationship. And I think that’s the most important part of this meeting, is to have a good exchange between President Trump and President Putin over what they both see as the nature of this relationship between our two countries.”

U.S.-backed local ground forces fighting the Islamic State and forces backing Syrian President Bashar al-Assad that are supported by Russia have moved increasingly closer to one another in southern Syria, bringing U.S. and Russian warplanes into closer proximity. In recent weeks — ­although Moscow has claimed to have cut deconfliction contacts with Washington — U.S. officials have said significant progress has been made between them in drawing lines to avoid one another.

“Our military leaders have communicated clearly with one another to make sure no accidents occur between our two countries in the Syrian theater,” Tillerson said. “This cooperation over deconfliction zones process is evidence that our two nations are capable of further progress.”

Separate from the fight against the militants, Russia, Iran and Turkey have called for the establishment of four safe zones in the western part of the country where Assad’s forces, with Russian and Iranian assistance, are fighting Syrian rebels. The United States is not a formal participant in those talks, but U.S. officials have said they may be willing to take over monitoring of one of the zones in Syria’s southwest corner where the borders of Jordan and Israel are endangered.

Although Trump, like President Barack Obama before him, has said he is not interested in a direct U.S. role in Syria’s civil war, the administration has become increasingly convinced that the permanent defeat of the Islamic State there is not possible while that war continues.

“With the liberation of Raqqa now underway,” Tillerson said, “ISIS has been badly wounded, and it could be on the brink of complete defeat in Syria if all parties focus on this objective. In order to complete the mission, the international community, and especially Russia, must remove obstacles to the defeat of ISIS and help provide stability that prevents ISIS from rising anew from the ashes of their failed and fraudulent caliphate.” ISIS is an acronym for the Islamic State.

Raqqa, the militants’ de facto Syrian capital, has been under assault by U.S. aircraft and artillery, and the U.S.-backed Syrian Democratic Forces, since late spring. On Monday, U.S. officials said the SDF had achieved a “key milestone.”

Having decimated much of the heavily populated west, Assad and his backers have begun heading eastward through the desert toward Islamic State fighters south of Raqqa. U.S. military officials have said they welcome any contribution to the anti-ISIS fight, as long as it does not impede or conflict with U.S. operations.

Following the G-20 summit, Tillerson will travel to Ukraine and to Turkey.

Carol Morello contributed to this report.