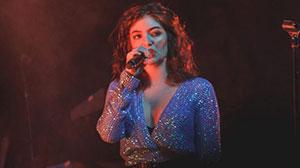 A cavernous warehouse on the UNESCO world-heritage-listed Cockatoo Island in the middle of Sydney Harbour was transformed on Thursday evening by New Zealand phenomenon, Lorde.

Private ferries shuttled 1,200 fans and media over to the isle from Darling Harbour where the Royals singer, 20, from Auckland, took to the stage for Nova’s Red Room.

The two-time Grammy winner, real name Ella Yelich-O’Connor, said she was “so happy” to be back in Australia, and felt at home because she could “recognise so many faces” in the “beautiful” audience.

Playing mostly songs from her new album during the hour-long, 10-song set, the usually private songstress opened up about the emotions she felt as she wrote Melodrama, the follow-up to her 2013 breakthrough album, Pure Heroine.

“I was as lonely as one can imagine being … I don’t feel like that often,” she said.

“Every knows that feeling, ‘am I too much?'”

But she knew in those times of despair that she could channel the intense emotions into something that would “feel so special” and make crowds scream and cheer, like they did last night on Cockatoo Island.

“It will all feel OK then,” she added.

Melodrama is written about her breakup with photographer James Lowe, who she had been dating for around three years, particularly the song, Green Light — from the scathing lyrics to the raw emotion of the video.

“After your heart is broken, music enters you on a new level,” Lorde told The New York Times Magazine in April. “You suddenly find yourself crying when Try Sleeping With a Broken Heart [Alicia Keys song] comes on.”

“It was my first major heartbreak,” she continued, adding that the lyrics to Green Light are “really about those moments kind of immediately after your life changes and about all the silly little things that you gravitate towards.”

It is not known when the pair officially split, but the last Instagram post involving the two of them was posted in November 2015, when Lowe snapped a picture of Lorde and added the caption, “She’s the heart that oxygenates my deepest blue.”

A number of well-know Sydney faces embraced the ferry journey and the chilly temperatures to catch a glimpse of Lorde in action.

Despite the old adage, two is company, three’s a crowd, Channel Nine Today show host, Karl Stefanovic, took his girlfriend Jasmine Yarbrough and his mother, Jenny. His three children are on holidays in Thailand with his wife Cassandra Thorburn, whom he split from last year.

Lorde has been enjoying the success of Melodrama which gifted the singer her first No.1 album in the US and Canada, and her second No.1 album in New Zealand and Australia, after 2013’s breakthrough Pure Heroine.

The Kiwi will be back Down Under in November for her Australia and New Zealand tour.​

Lorde with her ex-boyfriend James Lowe in November 2014.