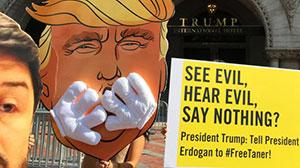 Daren Butler and Can Sezer

Istanbul: Amnesty International has called for the immediate release of a group of human rights activists detained by police while attending a training workshop on an island off Istanbul.

Turkish police detained 10 people including the local director of Amnesty International and others on suspicion of membership of a terrorist organisation, Amnesty said on Thursday in what it called a “grotesque abuse of power”.

The detentions came less than a month after a court ordered the arrest of the chairman of Amnesty’s Turkey branch, Taner Kilic, on the same charge in a crackdown following an attempted military coup in July 2016. Mr Kilic remains in jail pending trial.

Amnesty Turkey Director Idil Eser and the others were removed from a meeting they were holding at a hotel on Buyukada, an island just south of Istanbul, and taken to various police stations across Turkey’s largest city on Wednesday evening, a lawyer for some of the detainees, Bahri Belen, said.

Mr Belen said prosecutors had decided on a seven-day detention period, which needs to be approved by a judge. He said an explanation might come on Friday when the activists are transferred from the police stations to Istanbul’s police headquarters.

On Thursday, the European Parliament asked for Turkey’s European Union accession talks to be suspended if Ankara implements a constitutional overhaul, backed by a referendum in April, which expands the powers of President Recep Tayyip Erdogan.

The parliament has limited influence on the issue and Turkey said on Thursday it rejected proposals that it drop its EU membership bid in favour of cooperation in other areas.

EU leaders have been critical of Mr Erdogan and his behaviour toward opponents, both before and after an abortive coup against him a year ago. But they do not want to undermine an agreement struck last year whereby Turkey effectively stopped migrants reaching Greece, easing a crisis that had threatened EU unity.

EU Enlargement Commissioner Johannes Hahn, who was in Turkey on Thursday to discuss its performance in European Union accession talks, said he had raised the detentions with Turkish officials.

“… [But] I didn’t get a sufficient answer about it. We will continue to follow this,” he said after the meeting.

Mr Hahn also said he had stressed the need for Turkey to respect the rule of law and the right of people to a fair trial.

The United States is “deeply concerned” by the arrests, State Department spokeswoman Heather Nauert said in a statement.

“As with past arrests of prominent human rights defenders, journalists, academics, and activists, we underscore the importance of respecting due process and individual rights, as enshrined in the Turkish Constitution, and consistent with Turkey’s own international commitments,” Ms Nauert said. “More voices, not fewer, are necessary in challenging times.”

Amnesty International’s Secretary General Salil Shetty described the accusations against the 10 people, who were attending a workshop on digital security and information management, as absurd.

“Their spurious detention while attending a routine workshop was bad enough: that they are now being investigated for membership of an armed terrorist organisation beggars belief,” Mr Shetty said.

​Since the failed putsch a year ago, Turkey has jailed more than 50,000 people pending trial and suspended or dismissed some 150,000, including soldiers, police, teachers and public servants, over alleged links with terrorist groups.

Turkey’s main opposition leader, Kemal Kilicdaroglu, launched a European court appeal this week over the April vote, stepping up his challenge to the government as he leads a 425-kilometre protest march that will end on Sunday.

The march, which has gathered increasing support along the way, was called the day after the arrest last month of Enis Berberoglu, a CHP parliament member.

The purge, which has also led to the closure of some 130 media outlets and jailing of 150 journalists, has alarmed Turkey’s Western allies and rights groups, who say Mr  Erdogan is using the coup as a pretext to muzzle dissent.

More than 240 people were killed in last year’s coup attempt, and the government has said the security measures are necessary because of the gravity of the threats facing Turkey.

Amnesty Turkey’s chairman was detained in early June with 22 other lawyers over alleged links to the network of Muslim cleric Fethullah Gulen, whom Ankara blames for the failed coup.