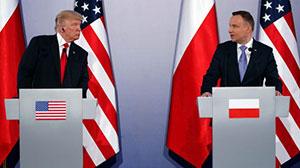 Washington: It’s billed as a multilateral encounter but, as leaders of the globe’s 20 leading economies gather in Hamburg on Friday, it’s the big dogs and their bilateral relationships that command attention – the US and Russia; and the US and China.

Analysts obsess about the outsized personalities – is there a room in the German port city big enough to house the Trump and Putin egos? But some counsel caution, arguing instead, that the weight of history will direct the leaders’ decision-making or, as is more likely, their fudging.

Consider this from George Friedman, former head of US intelligence platform Stratfor, on his Geopolitical Futures blog: “the leaders … think of themselves as decision-makers, when really they are hostages to history. In fact, the dynamics … are indifferent to the people who attend. Personalities are interesting but ultimately indecisive in power politics”.

His point was well made when US President Donald Trump spoke in Warsaw before his arrival in Hamburg.

Like his predecessors during visits to Europe, Trump made an explicit commitment to Article 5 of the NATO Treaty – you know, the bit about collective security and all having each other’s backs.

“The United States has demonstrated not merely with words, but with its actions, that we stand firmly behind Article 5, the mutual defence commitment,” Trump said.

Those 24 words were a big concession to history.

Speaking at NATO’s Brussels headquarters just weeks earlier, Trump’s stubborn refusal to commit to this key element of post World War II security architecture infuriated his European counterparts – particularly when it was reported later that a committee of advisers had deliberately written such a line into his speech, but Trump could seemingly not utter it.

So, on his Warsaw detour, Trump, the NATO sceptic, walked away from another big chunk of the anti-globalist rhetoric of his presidential campaign.

His speech to a crowd, reportedly enlarged by governing party loyalists bused into the capital from more conservative rural areas, was described as dark, provocative and nationalist – and, in some quarters, his paeans to American and European history were read as a dog-whistle to white nationalism. Or maybe it was just to distract from his NATO concession.

“We write symphonies. We pursue innovation. We celebrate our ancient heroes, embrace our timeless traditions and customs, and always seek to explore and discover brand-new frontiers,” he said.

But having so identified the pinnacle achievement of global development, Trump fretted about the threats of extremism and terrorism: “The fundamental question of our time is whether the West has the will to survive.

“Do we have the confidence in our values to defend them at any cost? Do we have enough respect for our citizens to protect our borders? Do we have the desire and the courage to preserve our civilisation in the face of those who would subvert and destroy it?”

THE WEST WILL NEVER BE BROKEN. Our values will PREVAIL. Our people will THRIVE and our civilization will TRIUMPH! pic.twitter.com/sozuVgdp5T

“We can have the largest economies and the most lethal weapons of anywhere on Earth, but if we do not have strong families and strong values, then we will be weak and we will not survive. If anyone forgets the critical importance of these things, let them come to one country that never has. Let them come to Poland, and let them come here to Warsaw and learn the story of the Warsaw Uprising.”

When more pressing issues intruded, Trump had a go at Russian President Vladimir Putin: “We urge Russia to cease its destabilising activities in the Ukraine and elsewhere and its support for hostile regimes, including Syria and Iran, and instead join the community of responsible nations in our fight against common enemies and defence of civilisation itself.”

And he gave away nothing on how Washington will respond to North Korea’s latest missile test: “We’ll see what happens – I don’t like to talk about what we have planned – but I have some pretty severe things that we’re thinking about. They are behaving in a very, very serious manner, and something will have to be done about it.”

Trump’s big meetings in Hamburg are on the sidelines of the G20 summit – with Putin and China’s leader Xi Jinping.

For now, he has consigned Xi to the sin bin, calculatedly not inviting him to a Thursday dinner with Japan’s Shinzo Abe and South Korea’s Moon Jae-in to strategise on the North Korea crisis. And he’s back on the Twitter keyboard, lashing China on trade.

Ever the man from the KGB, Putin is diligent in seeking to understand the weaknesses of those he meets – he once brought a Labrador to a meeting with German Chancellor Angela Merkel because he knew she was scared of dogs.

We can only wonder about what props the Russian leader will bring to his first face-to-face meeting with Trump.