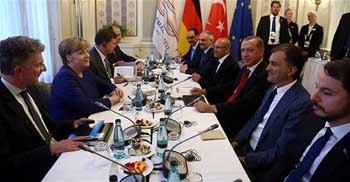 The two leaders shook hands ahead of the meeting and appeared before the press.

Speaking to reporters ahead of his meeting with Merkel, Erdoğan stressed that he would not mince his words, raising the issue of a banner targeting him in front of the chancellery building and Berlin’s stance on the outlawed Kurdistan Workers’ Party (PKK) and the Fethullahist Terrorist Organization (FETO).

Erdoğan also reportedly touched on the German ban on his potential address to Turks living in the country.