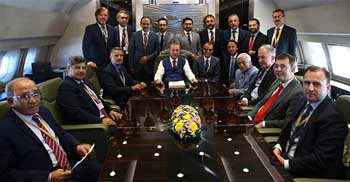 President Recep Tayyip Erdoğan said on July 6 that the European Parliament’s vote to accept a report to suspend the country’s EU accession talks was not binding for Turkey.

“The [decision] has no value. This decision does not bind us,” Erdoğan told reporters on his way to Hamburg where he is currently attending the G-20 talks.

The European Parliament voted on July 6 to accept a proposal to suspend accession talks with Turkey if it goes ahead with the constitutional changes endorsed in the April 16 referendum.

The parliament voted in favor of the 2016 Commission Report on Turkey recommending the suspension of accession talks, with 477 voting in favor and 64 voting against. Almost 100 lawmakers abstained in the vote.