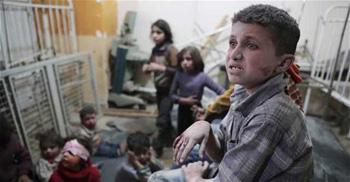 MOSCOW, /TASS/. The US policy towards Syria has become more aggressive with the advent of the Trump administration, Boris Dolgov, a Senior Research Fellow at the Russian Academy of Sciences’ Center for Arab and Islamic Studies, said at a roundtable discussion dedicated to the fifth round of the intra-Syrian talks in Astana.

“The main objective of the United States in Syria is not the fight against the Islamic State [IS, terror group, outlawed in Russia – TASS]. It’s toppling the unwanted regime of Bashar al-Assad and destroying Syria,” the expert said. “That’s also Israel’s objective. If the Assad regime is toppled, that means that Iran’s ally has been removed.”

“Weakening Iran as much as possible is the goal of Israel and the United States as Israel’s strategic ally,” Dolgov stressed.

The Russian expert also pointed to the actions of the Kurds supported by Washington.

“Before the beginning of the Russian Aerospace Forces’ operation, the US and its allies tried to eliminate Bashar al-Assad with the help of the armed Islamist opposition, including the IS. Now it is trying to do that with the help of Kurds,” he said. According to Dolgov, the US wants Raqqa to be captured by Kurds and plans to help them create an enclave with big autonomy rights and, ultimately, an independent state in Syria. “The US is using the Kurdish factor to achieve its goals,” Dolgov concluded.