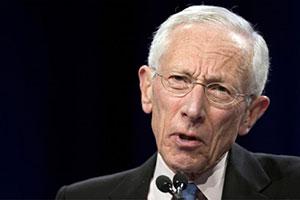 Federal Reserve Board Vice Chair Stanley Fischer on Thursday called on U.S. government policymakers to do more to boost business investment, spur innovation, and train and educate workers to jumpstart a “dismal” record of productivity growth.

“Reasonable people can disagree about the right way forward, but if we as a society are to succeed, we need to follow policies that will support and advance productivity growth,” Fischer said in remarks prepared for delivery to the Summer Institute of Martha’s Vineyard Hebrew Center.

Fischer did not address the current state of the U.S. economy or monetary policy, but focused instead on the importance of output per worker as a fundamental driver of economic growth and standards of living.

Fischer did not offer any specific commentary on policies under the new administration of President Donald Trump, who has so far struggled to turn his political agenda into legislation during the first several months of his term.

But Fischer did say it would be “highly desirable” to provide more clarity about health care, regulation, taxes and trade policy because uncertainty over the policy environment is making businesses “reluctant to invest.”