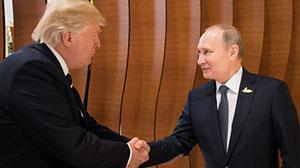 Donald Trump and Vladimir Putin have met for the first time, shaking hands as the G20 summit in Hamburg began.

The US and Russian leaders say they want to repair ties damaged by crises including Russia’s alleged meddling in the US election.

Climate change and trade are set to dominate the two-day summit, with mass protests in the streets outside.

US First Lady Melania Trump has been unable to leave her hotel in the German city because of the protests.

Police are trying to keep demonstrators – who are protesting against the presence of Mr Trump and Mr Putin, climate change and global wealth inequalities – well away from the summit venue, and have deployed water cannon.

Clashes between police and demonstrators, some of whom threw missiles, have left dozens of police officers and protesters injured.

The G20 (Group of Twenty) is a summit for 19 countries, both developed and developing, plus the EU.

In her summit opening statement, German Chancellor Angela Merkel said: “We are all aware of the great global challenges.

“We know that time is short and therefore solutions very often can only be found if we are ready to compromise and work together without bending over backwards too much because, of course, we can express different views on some issues.”

Mrs Trump had been due to take part in an excursion with other leaders’ spouses, but her spokeswoman Stephanie Grisham said: “The Hamburg police could not give us clearance to leave.”

Mrs Trump herself tweeted concern for those injured in the protests.

What can we expect from the Trump-Putin talks?

A brief video clip posted on the German government’s Facebook page shows the two men shaking hands, and Mr Trump patting Mr Putin’s arm as they smile in the company of other leaders. The pair are now holding a bilateral meeting.

It is unclear if they will speak to reporters afterwards.

The two men have staked out opposing views on major international issues in the run-up to the summit:

Mr Trump’s choice of words aimed at Russia in his Warsaw speech suggests he recognises the political danger of being seen as too close to Mr Putin, the BBC’s diplomatic correspondent James Robbins says.

Russian media have low expectations of the meeting with one observer, Fyodor Lukyanov, writing in Rossiyskaya Gazeta: “The main thing is that nothing gets worse.”

Will climate change overshadow the summit?

Canadian Prime Minister Justin Trudeau has urged G20 leaders to impress upon Mr Trump that he should act as a role model in addressing climate change.

Mrs Merkel has said the G20 will focus on the Paris climate deal but, as the G20 host, she will work to find compromises.

What else is being discussed?

Jean-Claude Juncker, head of the European Commission, said the EU would respond “immediately and adequately” if the US tried to impose punitive tariffs on European steel imports.

In a dig at Mr Trump, he said a new EU-Japan trade deal signed on Thursday showed Europeans were not putting up “protectionist walls”.

Mrs Merkel and other EU leaders have expressed their commitment to an open international trading system, while the Trump administration pursues protectionism under the “America First” motto.

Why are protesters so angry?

A day after violent protests, demonstrators could be seen gathering again in Hamburg on Friday to the beating of drums, as businesses surveyed damage to shop fronts and firefighters hosed down burning cars.

The city’s squats have long been a base for left-wing militants but up to 100,000 people from Hamburg and beyond were expected to gather during the summit to protest against capitalism, war and climate change.

One protester, Dirk Mirkow, was asked by German broadcaster Deutsche Welle why he was demonstrating.

“For example because Donald Trump denies climate change,” he replied. “And because the richest eight men own as much as a large percentage of the world’s population.”