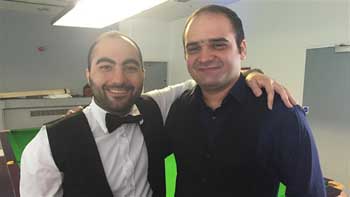 The Iranian men’s national snooker team has recorded another emphatic win at the group stage of the 2017 Little Swan World Cup in China, and cherished its hopes of progressing to the next round of the professional non-ranking team tournament.

The Iranian pair of Hossein Vafaei and Soheil Vahedi thrashed the Australian side 4-1 in a Group D match played at the Wuxi City Sports Park Stadium in China’s eastern-central city of Wuxi on Thursday.

The Iranian cueists are scheduled to play counterparts from Malta in their next game on Friday.

The 2017 Little Swan World Cup, which is the 15th edition of the event, kicked off in Wuxi, China, on July 3 and will run through July 9.

The tournament uses the same format as that used in the 2015 edition. There are 24 national teams, and the entrants have been divided into four groups of six in the initial round.

The Iranian outfit has been drawn in Group C along with Australia, England, Malta, Pakistan and Switzerland.

China B has joined Brazil, Finland, Malaysia, Norway and Wales in Group A.

Belgium, China A, Egypt, Germany, Hong Kong and Ireland Group B in the event.

During the group stage, every national team plays a best-of-five frame match against each of the other sides in their pool. All matches consist of five frames, two singles, a doubles frame, and two reverse singles. The top two teams from each group advance to the knockout stage.

During the quarter-finals, semi-finals, and championship final, the eight qualifying team are paired off in a head-to-head knockout.