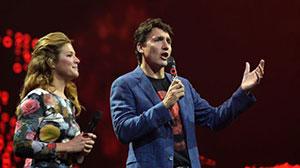 Justin Trudeau and his wife Sophie have arrived in Germany ahead of this weekend’s G20 Summit, but not before making an appearance at Hamburg’s Global Citizen Festival to discuss the importance of gender equality and empowering women. The couple joined a star-studded line-up which included Coldplay, Shakira, Pharrell Williams and Ellie Goulding in the hope of raising A$871.5 million from governments for dealing with international health, gender equality and education issues.

Before introducing Coldplay, who have made a long-term commitment to the organisation, the Trudeaus spoke out about the fight for “fairness and equality” in every global issue beginning with the empowerment of women and girls in every social and political circumstance.

“The really big issues we face, like climate change, poverty, and disease affect women and girls more than anyone else,” Sophie said, as she noted Canada’s commitment in introducing Canada’s first Feminist International Assistance Policy.

“The fight for equality begins with empowering women and girls.” – we couldn’t agree more, @JustinTrudeau! pic.twitter.com/mHT4t1g2ga

Under this new policy, Canada will invest 95 per cent of their foreign aid into programs and organisations that have a specific impact on women and children, according to The Star Canada. International development minister Marie-Claude Bibeau, who is working closely alongside Trudeau, said that this new funding direction will allow women to be “powerful agents of change- driving stronger economic growth, encouraging greater peace and cooperation, and improving the quality of life for their families and their communities.”

“It invests in grass root organisations like never before and it underscores something we all know. Given equal opportunities women and girls can change the world,” Trudeau said on stage.

“And that is one of the messages I will be bringing with me to the G20 leaders summit this weekend, and I hope you will all share that message too. We must keep pushing ourselves on the road to gender equality,” he added to the crowd of around 12,000 people.

Ahead of the concert, pop star and Global Citizen ambassador Rihanna issued a challenge to many democratic world leaders. To which Trudeau responded: “we’ve got your back!”

[email protected] we’ve got your back! Thanks to @mclaudebibeau who made sure girls’ education is in our feminist international development policy.

Thank you GlblCtzns, partners and everyone who took on poverty tonight. We are and always will be #loudertogether. #GlobalCitizenFestival pic.twitter.com/HM0mmRjR3b

The Prime Minister, and his wife Sophie arrived in Hamburg with their son Hadrien just hours before the concert, with the three-year-old capturing the Internet’s heart in true Trudeau style. The couple swung their young son as they left the flight, before he held up a bunch of flowers to the camera given to his mother my German officials.

Greetings from Hamburg! Ready for the #G20 Summit and the @GlblCtzn Festival. pic.twitter.com/IyrAvt8vNJ