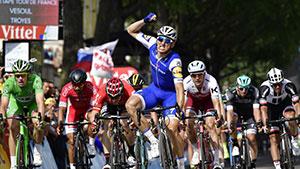 Team Sky’s Froome had a relatively stress-free first day in the yellow jersey, with the only threat that came his way being a runaway parasol midway through the stage.

But it proved a fairly sedate ride through Champagne country, with the main incident of note before the final kilometres being a stray parasol which blew into the road close to the front of the peloton and the Team Sky train.

Somehow it failed to fell any riders as it rolled through the pack close to Colombey-les-deux-Eglises, celebrated as the long-time home of the late former French president Charles de Gaulle.

Team Sky and Froome were spared the work of leading the peloton once again as the sprint teams took responsibility for chasing down the breakaway, finally making the catch inside the last three kilometres.

“This was definitely one of the most relaxed days I’ve ever done on the Tour de France.

“I’ve always dealt with the heat I’d say better than most people. It’s the cold I normally have a problem with.”

With world champion Peter Sagan’s disqualification from the Tour for crashing with Mark Cavendish on stage four still fresh in the memory, Demare forced his way through a narrow gap against the barriers on the approach to the line.

Alexander Kristoff of Katusha-Alpecin took fourth place in the ahead of Cofidis’ Frenchman Nacer Bouhanni, while Britain’s Dan McLay of Fortuneo-Oscaro came home in eighth place.mfl

It is a second stage win of this Tour and 11th overall for Kittel, who also raised his arms at the end of stage two in Liege.

“I tried to follow Demare and then I broke free one second ahead of the other sprinters and that gave me the chance.”

Although Demare missed out on adding to his stage-four win, he retains the green jersey as the leader of the points classification. He is 27 points ahea d of Kittel, with Team Sunweb’s Michael Matthews in third, 74 points back.