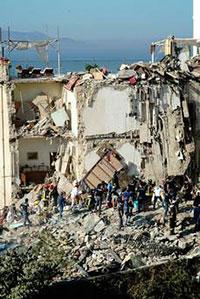 A five-storey apartment block has collapsed near the southern Italian city of Naples, and authorities are working to find anyone who may have been trapped.

Firefighters told Sky TG24 that six or seven people are believed to be buried in the rubble in the town of Torre Annunziata.

The news agency ANSA quoted witnesses as saying that there was no explosion before the collapse on Friday morning but that a train had just passed by on adjacent train tracks.

Images show the structure partially collapsed, revealing the interior of some apartments.

Firefighters on long, retractable ladders were checking the stability of an adjacent building in the residential neighbourhood.