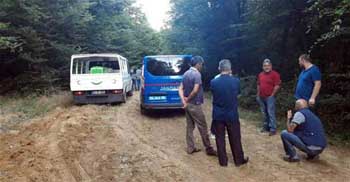 A pregnant Syrian woman was raped and killed with her 10-month-old baby in the northwestern province of Sakarya on July 6.

Emani Arrahman, who was nine months pregnant, was kidnapped in Sakarya’s Kaynarca district with her baby and was taken to the woods before being brutally murdered.

Villagers in the Birlik neighborhood found the dead bodies of the woman and the child murdered in the woods and informed gendarmerie officials.

After arriving at the scene, gendarmerie and police officers determined the identity of Arrahman and her child and found out that she was raped before her head was crushed with a rock.

The dead bodies were taken to a forensic medicine institute after examinations by a public prosecutor.

Two men, identified only as B.K. and C.B., were detained as part of the investigation. It was determined that they were working at a chicken factory with Arrahman’s husband, Khalid Arrahman.

Authorities also determined that B.K. and C.B. had an argument with the Syrian woman’s husband a couple of days ago and broke into their house when he was working at the factory before kidnapping the mother and the baby.

B.K. and C.B. confessed to the crime, saying they suffocated the baby to death.

The investigation into the case is ongoing.

Meanwhile, it was determined that Arrahman was set to give birth at a hospital on July 7 if the brutal incident hadn’t taken place.

“Those who carried out this brutality cannot be human. Terror and barbarity have no race or nationality. They should suffer the consequences of what they’ve done in the harshest possible way,” Sayan Kaya said, adding that Turkey is home to “our Syrian brothers and sisters.”

“Our sisters and brothers who were obliged to leave their homelands and take refuge in our country because of the savagery of a cruel regime are migrants. Those who point to our Syrian brothers and sisters as targets with provocations and manipulations have no difference from the cruel regime in Syria,” she said.

Saying “we won’t allow Syrians to be hurt and used as tools for dark plans,” the minister noted that the Turkish people would halt all traps set against their unity.

“Our people will ruin all traps set against their unity and integrity by owning up to their fraternity,” she added.

After finding out that his wife and baby were murdered, Khalid Arrahman was taken to the Kaynarca District State Hospital, where representatives of 13 non-governmental organizations released a statement condemning the incident.

Humanitarian Relief Foundation (İHH) Sakarya district head Sebahattin Aydın said those making propaganda for Syrians to leave are behind the crime, calling for major participation in the funeral.

Sakarya Mayor Zeki Toçoğlu also released a written statement on the issue, saying that “we will never allow seeds of violence and hatred to take root in the country.”
“We will stand with the oppressed and against the oppressor. Our fraternity is eternal,” Toçoğlu said.