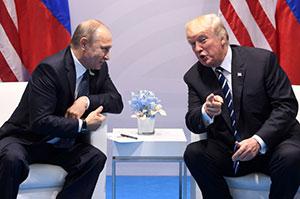 President Trump and Russian strongman Vladimir Putin shook hands twice Friday and sat face-to-face for the first time at the G20 in Germany — with Trump calling their meeting an “honor.”

Putin was also happy to sit with his American counterpart, telling Trump, “I am delighted to personally meet you Mr. President.”

He noted that the presidents have spoken on the phone “several times” on issues but that “phone conversation is never enough.”

“If we want to resolve bilateral and acute international issues, we definitely need personal meetings,” Putin added. “I’m delighted to be able to meet you in person Mr. President and I hope — as you have said — that our meeting will yield positive results.”

Trump and Putin exchanged pleasantries and a firm handshake twice during the first day of the G-20 summit — once at a meet-and-greet with world leaders, the other at a one-on-one session for the cameras.

“It’s an honor to be with you,” Trump told Putin.

Trump said he anticipates “a lot of positive things happening, for Russia, for the United States.”

“Putin and I have been discussing various things, and I think it has gone very well,” Trump said ahead of their 30-minute sit-down behind closed doors.

The high-stakes bilateral talk comes in the shadow of the US’s investigation into Russia’s meddling in last year’s presidential election.

The White House has said there is no set agenda for the meeting, though Tillerson said the Syria war would be discussed.

Last week, Kremlin spokesman Dmitry Peskov said he hoped the meeting between the two leaders would establish a “working dialogue.”

“The expectation is that a working dialogue will be established, which is vitally important for the entire world when it comes to increasing the efficiency of resolving a critical mass of conflicts,” Peskov told reporters.

The Trump and Putin meeting was the first between US and Russian presidents since Barack Obama met with Putin at the United Nations in September 2015.