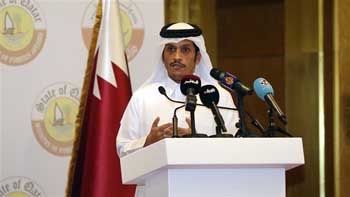 Qatar has rejected a list of demands from Saudi Arabia and its allies, prompting them to pledge more punitive measures against Doha. To discuss the issue, Press TV has interviewed Brad Blankenship, a journalist of the al-Masdar news from Cincinnati, and Michael Lane, president of the American Institute for Foreign Policy from Washington.

Blankenship believes the Saudi-led coalition is planning to undermine the sovereignty of Qatar both in internal and international arenas.

“The Saudi kingdom and its allies are trying to undercut all of Qatar’s independent international relations that they have for example with Iran, with the Lebanese resistance, Hamas, Muslim Brotherhood and others,” the journalist said on Thursday night.

The Saudi authorities and their coalition are very serious about bringing Qataris to their knees and are “trying to make Qatar a client state of the Saudis,” he noted.

Blankenship went on to say that the crisis between Saudi Arabia and Qatar will “go on for a long time.”

Arab tribes routinely disagree with each other but this crisis is “unique” because it has completely changed the rules of engagement, the analyst argued.

According to Blankenship, the Qatari people “will not forget and forgive this travesty” by Saudi Arabia and their coalition and the tension “will definitely upset the balance of power in the Persian Gulf and in the region.”

“This move with Qatar is going to be very crucial for [determining] next stages of the rivalries that are emerging in the Middle East,” he explained.

Several international entities have accused Saudi Arabia of sponsoring terrorism throughout the world especially in the Middle East. The Henry Jackson Society, a British think tank, said in a report on Wednesday that Saudi Arabia has, since 1960s, sponsored a million-dollar effort to export the radical Wahhabi ideology across the Islamic world.

Blankenship condemned Riyadh and its allies for their hypocritical behavior when it comes to backing terrorist elements and groups in the region, while trying to put the blame on Doha.

The Saudi-led coalition is “correct” that Qatar has been supporting terrorist organizations for a long time, but the Saudis themselves have been aiding and abetting terrorists as well, he said.

Lane, the other guest on the show, said that it was predictable “Qatar was not going to cave in” to the list of the demands.

He said an early solution to the crisis in unlikely, because “Qatar seems to think that they do not need to give in” and Saudi Arabia and its coalition think the longer they hold out, the more Qatar will come back and give them additional concessions.