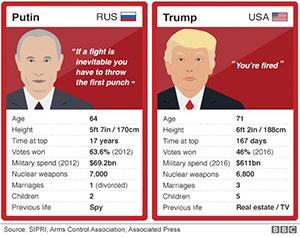 The formal meeting will be scrutinised across the world, set as it is against the backdrop of US investigations into possible collusion between Russia and Trump campaign figures during last year’s election.

Whether Mr Trump will raise the issue of election hacking is the million-dollar question, given he has downplayed Russia’s alleged role.

First meetings between major world leaders can be unpredictable affairs. Mr Trump has in the past suggested he could get along with Mr Putin and praised him as a “strong leader” but it is unclear how he feels now.

In Moscow, the Kremlin is painting the meeting as an opportunity for the pair to “get acquainted and finally understand the true approach of each other”.

But looking beyond the testy politics of US-Russia relations, what do Mr Trump and Mr Putin have in common, and what sets them distinctly apart?

Route to the top: In the shadows and in the limelight

If there’s one sharp difference between these two men, it is their back stories.

Vladimir Putin spent his early career in the world of Cold War espionage, and was working as a Soviet spy in East Germany when the communist state crumbled.

He is used to operating in the shadows, and kept a low profile as an aide to the mayor of St Petersburg in the 1990s before taking the reins of the FSB intelligence agency and later the presidency.

Mr Putin has been at the top of Russian politics since 2000 and has the reputation of a cunning street fighter, an image that can be traced back to his days growing up in a tough communal housing block in Leningrad.

He has said those years taught him that “if a fight is inevitable, you have to throw the first punch”.

Donald Trump, in contrast, was born into wealth as the son of a New York real estate tycoon.

He managed to avoid being drafted into military service during the Vietnam War, and got started in real estate himself with a $1m loan from his father, eventually building a property, hotel and entertainment empire.

Far from keeping a low profile like Mr Putin, Mr Trump shot to stardom as host of reality TV show The Apprentice.

He later used his fame and wealth as a springboard to make a bid for the Republican Party’s presidential nomination in 2015.

Yet though his public style is very different – brash and unpredictable where Mr Putin is comfortable yet controlled – like the Russian leader he doesn’t shy away from a fight.

Neither man hides his ambition to recover some sense of lost grandeur for his country.

Mr Putin famously called the collapse of the Soviet Union “the biggest geopolitical catastrophe of the [20th] Century”.

His moves in Ukraine and Syria are seen as attempts to bolster Russia’s power and influence, and hit back at the West for the expansion of Nato into Eastern Europe that he so resents.

And Western European officials accuse him of meddling in their elections to try and weaken the European Union.

On his side, President Trump’s stated ambition is to “Make America Great Again”.

For him this means boosting US military spending, putting pressure on allies to pay for more their own defence, and pulling out of efforts to fight climate change to protect jobs in domestic industries like coal.

They also share a “strongman” style and macho attitudes which have shone through in meetings with world leaders.

Mr Trump refused to shake German Chancellor Angela Merkel’s hand during an awkward March photo-op, and pushed past Montenegro’s prime minister at a Nato summit in Brussels in May to ensure he was front and centre.

Vladimir Putin uses more calculated means to intimidate others, once letting his large labrador into a meeting with Mrs Merkel, who is afraid of dogs.

The Trump White House is a family affair, something that certainly cannot be said of Vladimir Putin’s Kremlin.

President Trump’s daughter, Ivanka, has an office in the West Wing and advises her father in an unpaid role.

Her husband, Jared Kushner, is a senior adviser to the president and a significant force in the White House. His responsibilities stretch from the Middle East and China to criminal justice reform and relations with Mexico.

President Putin, on the other hand, zealously shields his private life and family from scrutiny.

He and Lyudmila, his wife of nearly 30 years, announced their divorce in 2013, and his two daughters are kept well away from the public gaze.

Little was known about them until media reports in 2015 revealed his youngest daughter Katerina was living in Moscow under a different name and working in a senior position at Moscow State University. She is also an acrobatic rock and roll dancer.

Maria, the elder daughter, is an academic specialising in endocrinology.

The differences in approach to family are stark. Ivanka Trump and Jared Kushner’s five-year-old daughter Arabella sang in Mandarin to Chinese President Xi Jinping during his US visit in April.

Mr Putin, meanwhile, recently refused to disclose the names and ages of his two grandchildren.

Mr Trump might have popularised “fake news” as a pejorative term that politicians the world over can now hurl at journalists, but he’s not alone in describing critical coverage as false.

In dealing with the media, however, Vladimir Putin normally remains calm.

Unlike Mr Trump, he does not fire off angry tweets about coverage he doesn’t like – he is calculating and level-headed when taking questions from journalists.