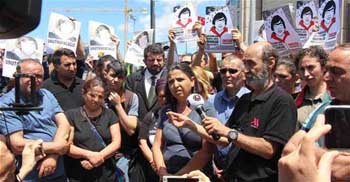 On July 6, an Istanbul court rejected a demand from the family of the young Gezi Park protests victim Berkin Elvan to arrest a police officer charged with killing Elvan “with probable intent.”

The 17th Heavy Penal Court gave its ruling based on “evidence on the suspect,” stating that “the suspect has been following the hearings” and “that there is no suspicion on the suspect’s fleeing,” Doğan News Agency has reported.

Berkin Elvan, then 14, became a symbol of Turkey’s anti-government Gezi protests after he was shot by a tear gas canister fired by police in June 2013. He died in March 2014 after 269 days in a coma.

On July 6, the police officer, identified only by the initials F.D., who is accused of firing the tear gas canister at Elvan’s head, appeared in the trial through the voice and video informatics system (SEGBİS).

The Elvan family’s lawyer, Oya Aslan, demanded that F.D. be arrested. “Among the group that intervened in the incident, the only person that had a gas canister is the suspect. The killing is ‘intentional’ but because it is a police officer in question there is no arrest,” she said.

The second hearing of the trial took place with the participation of Berkin Elvan’s parents, lawmakers from the main opposition Republican People’s Party (CHP), lawmakers from the Peoples’ Democratic Party (HDP), and representatives of the Taksim Solidarity Platform.

The court decided to adjourn the trial to a later date as the suspect’s video image on the SEGBİS system was reported to “be not clear enough.”

The suspect had in the first hearing in April requested to take part in the trial from the eastern province of Van via SEGBİS, as he claimed that his life would have been in danger if he was to join them in Istanbul.