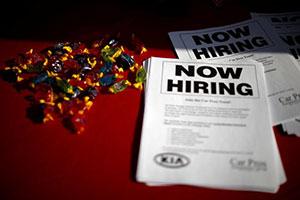 U.S. employers likely stepped up hiring in June and boosted wages for workers, signs of labor market strength that could keep the Federal Reserve on course for a third interest rate increase this year.

According to a Reuters survey of economists, the Labor Department’s closely watched employment report on Friday will probably show that nonfarm payrolls increased by 179,000 jobs last month after gaining 138,000 in May.

The unemployment rate is forecast steady at a 16-year low of 4.3 percent. It has dropped five-tenths of a percentage point this year and matches the most recent Fed median forecast for 2017.

“June’s employment report could provide sufficient evidence to Fed officials that they are still positioned to proceed with their monetary policy normalization plans in the second half of the year,” said Sam Bullard, a senior economist at Wells Fargo securities in Charlotte, North Carolina.

The Fed raised its benchmark overnight interest rate in June for the second time this year. But with inflation retreating further below the central bank’s 2 percent target in May, economists expect another rate hike only in December.

June’s anticipated employment gains would be close to the 186,000 monthly average for 2016 and reinforce views that the economy regained speed in the second quarter after a sluggish performance at the start of the year.

But the pace of job growth is expected to slow as the labor market hits full employment. There is growing anecdotal evidence of companies struggling to find qualified workers.

As a result, some companies are raising wages in an effort to attract and retain their workforces. Economists expect worker shortages to boost wage growth, which has remained stubbornly sluggish despite the tightening labor market.

Average hourly earnings are forecast increasing 0.3 percent in June after gaining 0.2 percent in May. That could lift the year-on-year increase in wages to 2.7 percent from 2.5 percent in May.

“The days of month after month of 200,000 jobs being created are likely behind us,” said Ryan Sweet, senior economist at Moody’s Analytics in West Chester, Pennsylvania.

“We will see trend job growth continue to moderate. That doesn’t necessarily signal that the expansion is running out of juice or that a recession is imminent, it is just a symptom of a full-employment economy.”

The economy needs to create 75,000 to 100,000 jobs per month to keep up with growth in the working-age population.

Republican President Donald Trump, who inherited a strong job market from the Obama administration, has pledged to sharply boost economic growth and further strengthen the labor market by slashing taxes and cutting regulation.

But Republicans have struggled with healthcare legislation and there are also worries that political scandals could derail the Trump administration’s economic agenda.

Job gains were likely broad in June. Manufacturing payrolls likely rebounded after factories shed 1,000 jobs in May. But employment in the automobile sector probably declined further as slowing sales and bloated inventories force manufacturers to cut back on production.

Ford Motor Co has announced plans to slash 1,400 salaried jobs in North America and Asia through voluntary early retirement and other financial incentives. Others, like General Motors are embarking on extended summer assembly plant shutdowns, which will temporarily leave workers unemployed.

The retail sector is expected to have purged jobs for a fifth straight month as department store operators like J.C. Penney Co Inc, Macy’s Inc and Abercrombie & Fitch struggle against stiff competition from online retailers led by Amazon.