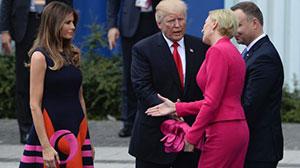 One day we will reach a point where entire business etiquette courses are taught solely using footage of US President Donald Trump trying to shake the hands of world leaders.

This time, the US President was meeting his Polish counterpart, President Andrzej Duda, in Warsaw, before his attendance at the G20 Summit in Germany, which begins on Friday.

However, it was Trump’s attempted handshake with Duda’s wife, Polish first lady Agata Kornhauser-Duda, which has attracted attention.

Footage appears to show Trump extending his hand to Kornhauser-Duda, a high school teacher, who walks straight past it to greet his wife, Melania Trump.

After greeting the US first lady, Kornhauser-Duda then turns to shake his hand.

While some have presented the event as a snub, it seems equally likely that Kornhauser-Duda simply did not see the US President’s hand extended to her.

Trump has something of a reputation for messing up handshake photo opportunities with world leaders.

In March, the former reality star made headlines after apparently ignoring German Chancellor Angela Merkel’s request for a handshake.

(Although it should be noted that a “do-over” has since occurred: Trump arrived in Hamburg on Thursday, where he did indeed shake Merkel’s hand for a photo opportunity, after she extended it.)

The US President has also previously had awkward handshakes with Japanese Prime Minister Shinzo Abe (a full 19 seconds of forceful grip), while he appeared to meet his match when he received an equally forceful handshake from French President Emmanuel Macron in March.