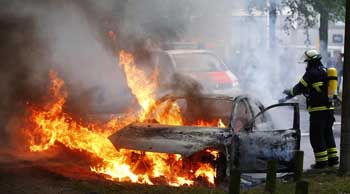 Unrest in Hamburg has continued into Friday as G20 summit has kicked off in the city. Police had to resort to water cannon to disperse protesters while earlier several cars were set on fire in the suburb of Altona.

G20 protesters staged a sit-in demonstration and blocked a road in Hamburg on Friday morning. Police said that they tried to urge the protesters to disperse peacefully, but then deployed water cannon to clear the road.

Earlier, demonstrators set several cars on fire in Altona, several police vehicles also were vandalized, according to Hamburg police, who tweeted the images of police vans with black paint and smashed windows.

People have been posting numerous videos and photos online showing plumes of smoke rising in the Hamburg suburb. Police advised people to avoid the area to not get caught up in the chaotic scenes.

Protests in Hamburg are ongoing, with some groups of demonstrators sitting on the streets, while police are taking protesters one by one in attempt to clear the road.

Pictures and videos on social media posts show burning cars in the streets of Altona.