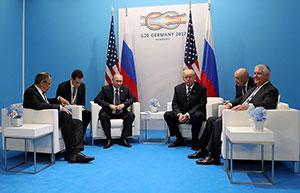 HAMBURG, /TASS/. The conversation between Russian and US Presidents Vladimir Putin and Donald Trump was very specific, Russian Foreign Minister Sergey Lavrov said following the meeting between the Russian and US presidents.
“That was a very lengthy, very specific conversation,” Russia’s top diplomat said. “My impression is that both presidents, the Russian and the American, are guided by the two countries’ interests.”
“We with [US Secretary of State] Rex Tillerson have been instructed to continue and expand cooperation between our ministries, both directly and at the United Nations Security Council, on the entire spectrum of the international agenda, including the Korean Peninsula,” he said.
“It was agreed to accelerate the procedures required for the appointment of the new ambassadors – the US ambassador to Russia and the Russian ambassador to the US,” the top diplomat said.
“The situation in Syria, in Ukraine, on the Korean Peninsula, problems of cyber security, and a range of other issues were discussed in detail,” he said, adding that the two leaders “agreed on a number of concrete things.”
Cyber Security
Vladimir Putin and Donald Trump, have agreed to set up a bilateral working group on cyber security, Russian Foreign Minister Sergey Lavrov said on Friday after a personal meeting between the two leaders on the sidelines of the Group of Twenty summit in Germany’s Hamburg.
“It was agreed that all of these issues, including anti-terrorism efforts, fight against organized crime and hacker activities in any of their manifestations will be in focus of bilateral Russian-US cooperation,” he said. “A bilateral working group will be set up for these ends.”
According to Lavrov, much attention was focused on cyber security matters as “this sphere is becoming more and more risky and generates threats, including threats of terrorism and of other types of organized crime and threats to normal functioning of society, in particular, children’s pornography, pedophilia, the so-called suicide networks.”
Ukrainian crisis
Western countries understand that it is necessary to exert pressure on the Kiev authorities to make them implement the Minsk agreements, according to Lavrov.
“All are interested to see the parties to the Minsk agreements, and Ukraine is a key party to them, implement what is written there,” he said. “Our Western partners, and we feel it, see the necessity of extra impetus to this process which has been stalled.”
“I don’t remember President Trump offering any other plan. And today’s lengthy conversation with [US Secretary of State] Rex Tillerson in the morning revealed no deviations from the Minsk agreements either,” Lavrov said when asked whether the US side had offered any new approaches to the Ukrainian settlement.
According to the Russian diplomat, there is common interest to continue movement along the path of the Minsk accords.
Russia hopes that the new US envoy for Ukraine will visit Moscow in the near future, Lavrov said. “While discussing Ukraine, the American side said that they appointed a special envoy for resolving the Ukrainian crisis,” the minister said. “We hope that he will arrive in Moscow in the near future.”
According to Lavrov, “it was agreed to establish a channel between the Russian and US representatives to use the opportunities the US has to promote the settlement on the basis of the Minsk agreements taking into account and relying on the potential of the Contact Group and the ‘Normandy format.”
Jailed Russians
Moscow hopes that Washington will make a right choice over the cases of jailed Russian nationals, Viktor Bout and Konstantin Yaroshenko, Lavrov said.
“We are continuing to work on this issue,” he said. “We expect our American counterparts to make a right choice.”
Russian diplomatic property
An issue of the Russian diplomatic property seized in the United States was tackled at the meeting, Lavrov said.
“[The issue] was raised,” the minister said. “We will be seeking for justice.”