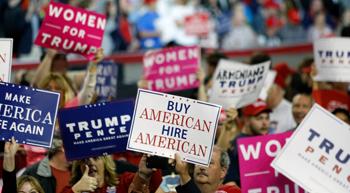 By Ann Saphir | SAN FRANCISCO
The U.S. economy is now a decade on from the start of the global financial crisis and at what most economists view as full employment, yet when it comes to wage rises, the answer seems to be forget about it.

Government data on Friday showed that average hourly earnings in June rose just 2.5 percent on the year and have slowed in the past two quarters rather than accelerating even as workers become scarce due to continued economic strength.
The lack of wage growth is mirrored across the developed world, most of which has staged a slower recovery than the United States.
For decades, higher wages had been driven by gains in worker productivity, but there are few signs now of an investment boom or of innovations fundamentally changing the way work is done. Productivity growth in the U.S. has averaged just one percent since 2005, half the level of 1990-2004; in the past five years the annual growth rate has been a dismal 0.5 percent.
“There is no shortage of explanation as to why wage growth remains tepid – shadow slack, reduced bargaining power due to globalisation, de-unionization, automation, etc. – but what is puzzling is that wage growth, at least according to the average hourly earnings measure, was clearly accelerating in 2015 and 2016,” JPMorgan Economist Michael Feroli wrote after the data release.
“Why it would slow only in the last two quarters is a mystery.”
While most economists say the jobs numbers alone are enough to keep the Federal Reserve on a path to hike rates again this year, the slow wages growth implies limits to how high the Fed can push rates and raises questions about the longer-term health of the U.S. economy, which depends on consumer spending for 70 percent of its activity.
International Monetary Fund data shows that across the developed world, the share of national income paid out to workers had fallen to less than 40 percent by 2015 from close to 55 percent in 1970, driven largely by technological change and globalisation.
“You can’t continue to get all this job growth but there is no wage pressure. So something is not adding up at all,” said JJ Kinahan, chief market strategist at TD Ameritrade in Chicago.
In March 2014 Fed Chair Janet Yellen said she believed that “perhaps 3 and 4 percent wage inflation would be normal.” Now the level appears to be stuck lower.
“The new benchmark for what we call good is lower than what we historically thought,” said San Francisco Fed chief researcher Mary Daly, one of the Fed system’s top labour economists.
“I would suggest the landing place doesn’t seem surprising to me given that we have very low productivity growth and inflation that’s not up to 2 percent,” Daly said in an interview last month.
Fed Vice Chairman Stanley Fischer said on Thursday the government could take some steps to boost productivity. Among these would be investing in basic research, infrastructure, education and public health, including clean air and drinking water.
(With reporting by Charles Mikolajczak and Jennifer Ablan in New York and Lucia Mutikani in Washington; Editing by David Chance and Andrea Ricci)