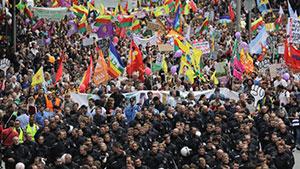 A Commentary by Florian Gathmann
Black-masked rioters left behind a trail of destruction in Hamburg on Friday night — and showed that they are only interested in violence. But real political protest is more important than ever.

The images from Hamburg are horrifying: Black masked radicals ravaging the city’s streets, setting cars on fire indiscriminately, destroying everything in their path in a blind fit of rage. Building barricades and arming themselves with paving stones and other objects for battles against police. They have, it would seem, only one goal in mind: violence.
The state must do whatever is necessary to stop these people — even if it means sending in heavily armed special police units as happened on Friday night in the Schanzenviertel neighborhood.
But what the state must avoid doing at all costs is mistaking the violent troublemakers with those who are demanding a substantive debate about the issues at hand. Political party representatives must also be careful to avoid broad generalizations. The rioters may shout political slogans as they go about their destructive business, but they aren’t political. At the most, they hide among and behind those for whom politics is the priority.
That is what makes it so difficult to distinguish and differentiate among the various groups — both politically and on the street level. Police in Hamburg are experiencing as much this weekend. Everyone who wants to protest peacefully against the G-20 should, of course, do so — even on this Saturday after the eruption of violence last night. Claims that all those taking to the streets in opposition to the summit are showing support for the violence of the black-clad mob are dead wrong.
It is completely legitimate to protest in Hamburg against the dark side of globalization, against the climate-damaging policies of many G-20 countries or more broadly against the summit’s format. Doing so does not put such legitimate protesters in the same camp as those who are only interested in violence. Whether doing so is potentially dangerous following the violence of the past two days is a separate question entirely.
Peaceful protest must be more than just a slogan. Those who find the presence of police officers at demonstrations to be a provocation should rethink their attitudes to the state. The state accords its citizens many freedoms and rights. And the state is also in charge of guaranteeing order and control. Those who have a problem with that should expect no sympathy.
URL:
• http://www.spiegel.de/international/germany/g-20-violence-protest-is-more-important-than-ever-a-1156773.html