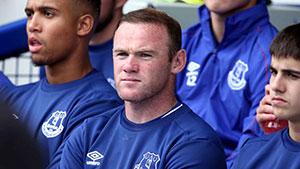 Wayne Rooney has completed an emotional return to Everton from Manchester United.
The 31-year-old’s anticipated move back to his boyhood club, after 13 successful years at Old Trafford, was confirmed on Sunday.
He leaves United as their record goalscorer with 253 strikes and after winning 12 major honours, including five Premier League titles and the Champions League.

But for Rooney, Everton was always his first love and remained close to his heart.
Rooney, who burst onto the scene as a precocious 16-year-old with the Toffees, told Everton TV: “It feels great. To be honest – I’ve kept it quiet for the last 13 years – but I’ve actually been wearing Everton pyjamas at home with my kids. I had to keep that a bit quiet!
“It’s a great feeling to be back. I’m excited, I cannot wait to meet the lads, get on the training pitch and then get on the pitch to play. I’m ecstatic – I just cannot wait to get back playing.”
Rooney has signed a two-year deal at Goodison Park and moves for an undisclosed fee.
Speculation linking him with the Toffees had intensified considerably in the past week and it seemed a deal was close when he was filmed at the Merseysiders’ training ground on Saturday.
In a statement issued to Press Association Sport, Rooney said: “It is some time since I said that the only Premier League club I would play for other than Manchester United was Everton, so I am delighted that the move has happened.
“Thirteen years ago I went to United with the intention of winning trophies and I have been fortunate to be a part of one of the most successful periods in the club’s history.
“I have come back to Everton because I believe Ronald Koeman is building a team that can win something and I look forward to playing my part in making that a reality for the club I have supported since I was a boy.”
Everton manager Ronald Koeman believes Rooney will help instil a winning attitude in the squad.
Koeman has had a busy summer, having already completed deals for Jordan Pickford, Davy Klaassen, Michael Keane, Henry Onyekuru, Nathangelo Markelo and Sandro Ramirez.
The Dutchman said: “Wayne has shown me that ambition that we need and that winning mentality – he knows how to win titles and I’m really happy he’s decided to come home.
“He loves Everton and he was desperate to come back. He is still only 31 and I don’t have any doubts about his qualities. It’s fantastic he’s here.”
Rooney has been one of United’s most influential players since his £27million signing in 2004 but he began to fall down the pecking order under Jose Mourinho last season, making just 15 Premier League starts. He appeared only as a last-minute substitute in the Europa League final victory over Ajax in May.
United boss Mourinho said: “It is no secret that I have long been an admirer of Wayne. He has been a model professional throughout his time at the club and will remain in the history books for many years to come.
“It is never easy to see a great player playing less football than he would like and I could not stand in his way when he asked to go back to Everton. His experience, focus and determination will be missed and I wish him well for the future.”
Rooney’s return to Everton has been eased by United’s interest in Everton striker Romelu Lukaku, for whom they have agreed a fee understood to be £75million with the Merseysiders.
Ed Woodward, United’s executive vice-chairman, paid tribute to the forward, who is also England’s record goalscorer.
Woodward said: “Wayne has been a fantastic servant to United since the moment he signed for us as a prodigiously talented, explosive teenager some 13 seasons ago.
“Who can forget his storybook debut hat-trick against Fenerbahce, the spectacular overhead kick against (Manchester) City and the countless match-winning performances in his time here? But after much discussion, the club has decided to accept his request to rejoin his boyhood team.
“He goes having created some of the most magical moments in some of the most successful years in the club’s history. Wayne leaves us as our greatest ever goalscorer and having won every major trophy in the game.
“His record will take decades for anyone to get close to matching and I am extremely grateful for the way he has led from the front since being appointed club captain three years ago.
“On behalf of the whole club and our hundreds of millions of fans around the world, we wish Wayne all the very best for the next phase of his incredible career.”