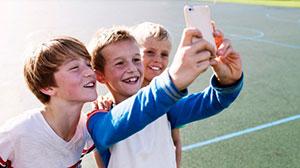 Ella Pickover
Children who own smartphones or tablets are more likely to have head lice, a new study has found.

One explanation could be that transmission of nits occurs when children gather around the devices.
Taking selfies was found to increase the likelihood of suffering from lice – but the risk was not statistically significant, according to researchers from Oxford University Hospitals NHS Foundation Trust who presented their findings to the British Association of Dermatologists’ Annual Conference in Liverpool.
Questionnaires were given to all parents attending the paediatric outpatient department at the John Radcliffe Hospital in Oxford, over a one-month period.
Ninety two questionnaires were completed, which included data on 202 children.
Of these, 45 per cent had experienced head lice in the last five years – girls with siblings aged six-to-nine years were most commonly affected.
Just over half the children owned a smartphone or tablet and two in five of these children used their device to take selfies.
Researchers found that only 29.5 per cent of youngsters who did not have a smartphone or tablet had head lice compared to 62.5 per cent who owned such devices.
And 55 per cent of those performing selfies experienced head lice.
But this was not found to be a statistically significant increase, the authors said.
Researchers said this raises “interesting questions” about how lice are transmitted.
“Compared to previous estimates of head lice incidence, our figures were much higher, showing that almost half of children have had them in the last five years, which may not come as a surprise to parents,” said one of the researchers, Dr Tess McPherson.
“We also noted that children with smartphones or tablets were more likely to get head lice, which is interesting but we can only guess that this is due to the way that young people gather around them, though there could be other reasons.