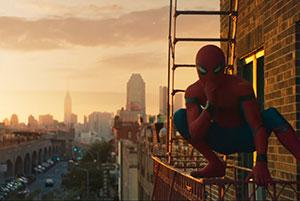 by Nancy Tartaglione
Refresh for latest…: Sony’s Spider-Man: Homecoming has come out swinging, setting a new bar for Peter Parker at the international box office.

Opening on 23,400 screens in 56 markets this weekend, the Jon Watts-helmed reboot grossed $140M. That’s the biggest bow ever for the Spidey franchise in the same set of plays and at today’s rates. Homecoming landed No. 1 starts in 50 of its offshore debuts and still has 38% of rollout ahead, including in such key markets as China, Japan, France, Germany and Spain. Combined with domestic, the global launch total is $257M.
In the same set of markets that opened this session, and at current exchange rates, the Tom Holland-starrer is tracking ahead of Marvel cousin Guardians Of The Galaxy 2 (+19%); previous incarnation The Amazing Spider-Man 2 (+29%) and rival superhero Wonder Woman (+59%).
The Sony/Marvel mash-up came in well above pre-weekend predictions which topped out at $110 before folks started to become more bullish in the past few days. Even without China and Japan, Asia was a huge launch with $61.3M and Korea the only major play in the mix. But what a play it was. SMH netted a $25.8M 5-day there for the 3rd biggest opening ever for a Hollywood film.
Likewise, Latin America was strong with $32.4M led by Mexico ($12M) and Brazil ($9.1M). In the latter, SMH is the biggest opening of all time for the month of July.
In IMAX, SMH grabbed $18M from 669 screens for the 2nd biggest global opening for a Sony title in the format. The international portion is $7M from 277 screens for IMAX’s top bow of all time with a Sony pic.
Coming up essentially on par with Spidey is Illumination/Universal’s Despicable Me 3 with $139M in 60 markets this frame. The weekend was bolstered by a record-breaking start in China. The threequel has an offshore cume of $298.4M and a global haul tallying $447.6M.
In the Middle Kingdom, Gru, Dru and the gang made off with $66M (RMB 453M), setting records for the biggest opening weekend and biggest opening day for an animated movie. IMAX can also claim those records in China with a full $4M frame on 417 screens, eclipsing Kung Fu Panda 3 for the PROC’s biggest animated opening in the format.
Looking at the like-for-like markets and at today’s exchanges, DM3 is running ahead of all comps, including Minions ($295M), The Secret Life Of Pets ($219M), Finding Dory ($210M), Despicable Me 2 ($195M), Zootopia ($175M), Frozen ($141M), Ice Age 4 ($202M) and Toy Story 3 ($186M).
Further breakdowns on the titles above, as well as others at play internationally, are being updated below.