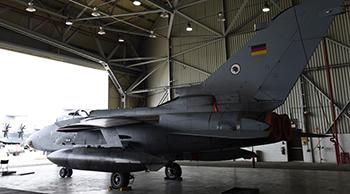 Germany has begun the process of withdrawing its troops from the Incirlik Air Base in southern Turkey, from where German troops have been carrying out reconnaissance missions as part of the US-led coalition’s campaign in Syria and Iraq. The move follows tensions with Ankara.

The process of transferring military aircraft and personnel from the Turkish airbase to a new location in Jordan will result in the suspension German participation within the US-led coalition for at least two or three months, the German Defense Ministry said earlier.
German troops, an air refueling tanker, equipment and aircraft parts left Incirlik for Jordan’s Al-Asrak base Sunday, Germany’s defense ministry spokesman confirmed to Reuters and the dpa news agency.
Tornado reconnaissance jets stationed at Incirlik will be sent back to Germany as the Jordanian base is not yet fully ready to accommodate the aircraft. The Tornado’s are due in Jordan by October.
Jordan’s Al-Asrak base is also much smaller than Turkey’s Incirlik and must first be modified to meet the needs of the German air grouping. Berlin must also still sign several technical agreements with Amman regulating the stationing of German aircraft at the base, German’s Der Spiegel weekly reports.
The US military will assist German troops in their relocation operation and will provide them with additional transportation capacity, including the Boeing C17 transport aircraft, according to Der Spiegel.
Germany had six Tornado fighter jets, a tanker plane used for refueling and about 280 troops stationed at Turkey’s Incirlik as part of the US-led coalition fighting Islamic State (IS, former ISIS/ISIL) in Syria and Iraq. The contingent was deployed to the base in response to the Paris terrorist attacks in December 2015.
The decision to relocate German troops from the Turkish base came as relations between the two countries took a new hit mid-May, when Ankara, for the second time, blocked a scheduled visit of German MPs with troops stationed at the base.
The German MP ban was motivated by Berlin’s decision to grant asylum to a number of Turkish nationals accused by Ankara of participating in the failed July 2016 coup attempt in Turkey. Those in question reportedly hold diplomatic passports and were stationed in NATO facilities in Germany at the time of the attempted coup.
Ankara ordered a similar Incirlik German MP ban in 2016, following the Bundestag’s (German parliament) decision to brand the Ottoman Empire’s massacre of Armenians in the early 20th century as genocide.