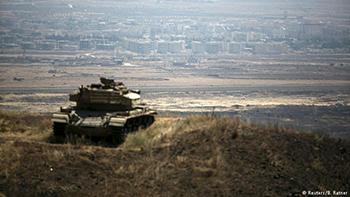 A partial ceasefire brokered by the US and Russia appears to have held in south-western Syria. Government and opposition delegations are set to hold a seventh round of UN-sponsored talks in Geneva.
Quneitra is located on the Syrian side of the Golan Heights, which were captured by Israel in a 1967 war.
Combat was halted in the three southern provinces covered by the truce – Daraa, Quneitra, and Sweida – after the ceasefire started at noon local time, a monitor told the French news agency AFP.

“The main fronts in the three provinces between regime forces and opposition factions have seen a cessation of hostilities and shelling since this morning, with the exception of a few scattered shells fired on Daraa city before noon,” Rami Abdel Rahman, head of the Britain-based Syrian Observatory for Human Rights, said on Sunday night.
The ceasefire
The agreement reportedly provides for the withdrawal from the truce region of Iranian-backed forces and Hezbollah, key backers of President Bashar al-Assad’s regime. Both Israel and Jordan have expressed alarm at these forces controlling the border.
The deal also means humanitarian aid deliveries may get through to the designated ceasefire areas and enable a gradual repatriation of refugees from Jordan.
The deal was announced on Friday and was brokered by the US, Russia and Jordan.
US President Donald Trump said he had discussed the Syrian conflict with Russia’s President Vladimir Putin at the G20 summit in Hamburg on Friday, but gave no details.
The Syrian regime announced its own unilateral ceasefire last week but fighting continued on front lines in the three provinces until early on Sunday.
Geneva: Syrian peace talks stumble along
Safe zones
Russia and Iran – Syrian regime allies – and Turkey, which backs the rebels, agreed at talks in Kazakhstan in May to set up four “de-escalation” zones in Syria. The deal was delayed as the three sides discussed who would monitor them.
The US did not take part in those de-escalation zones or the Kazakhstan talks, which started in January.
But the US, Russia and Jordan-brokered deal suggests the US may be re-engaging in diplomacy to end the war.
Trump’s National Security Adviser HR McMaster described the zones as “a priority for the US.”
“The US remains committed to defeating ISIS, helping to end the conflict in Syria, reducing suffering, and enabling people to return to their homes,” McMaster added, using an alternative acronym for the so-called “Islamic State” group. “This agreement is an important step toward these common goals.”
US, Russia agree on ceasefire in south Syria
Trump wrote on Twitter on Sunday that he was pleased fighting had not resumed.
Damascus quiet
There has been no official comment from the Syrian government and no mention of the ceasefire on state television’s news.
Boutros Marjana – the head of Syria’s parliamentary Foreign Relations Committee told The Al-Watan newspaper – which is close to the regime – that the agreement had been negotiated in consultation with Damascus.
“No details on the agreement were presented, but the Syrian state has background on it,” Boutros Marjana told the newspaper.
Russia’s President Vladimir Putin and US President Donald Trump on the sidelines of the G20 Summit in Hamburg.
Talks: expectations low
Ramzi Ezzedine Ramzi, deputy to UN Syria envoy Staffan de Mistura, told AFP the ceasefire deal had created “positive momentum” ahead the seventh round of peace talks betweeen the regime and opposition representatives in Geneva set to begin on Monday..
“It helps create a suitable atmosphere for the talks, and we will see that on Monday,” Ramzi said.
But expectations for UN-sponsored talks remain low, with little prospect of a major breakthrough.
The UN talks have taken a backseat to those led by led by Turkey, Iran and Russia in Kazakhstan.
More than 320,000 people have died in the war since it began in March 2011.
Trump meets Putin as G20 gets underway
jbh, cw/se (AFP, dpa)