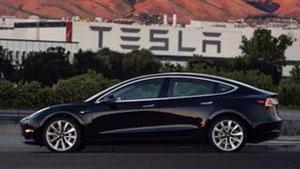 Tesla co-founder and chief executive Elon Musk has shared the first images of the electric car company’s Model 3 after it came off the assembly line.

Mr Musk tweeted a picture captioned “First Production Model 3” on Saturday.
The entrepreneur followed it up with another Model 3 photo, this time in colour, outside the Tesla factory site in California.
The Model 3 is Tesla’s first mass-market car and the first 30 owners will get in the driver’s seat on 28 July.
The four-door Model 3 will then be available to the public, with a base price of $35,000 (£27,100), almost half that of the Tesla’s next-cheapest model.
Tesla’s share price more than doubled between December and late June as investors backed Mr Musk’s strategy to transform the low-volume luxury electric car maker into a producer for the crowded mass-market, but has since fallen back.
Registrations for new Teslas in California, the car maker’s largest market, were down 24% in April compared with April 2016, according to IHS Markit data. The company responded by calling the figure “cherry-picked” data.
Tesla reported that first-half 2017 global deliveries for all its models rose to 47,100. That was at the lower end of its predicted sales range of 47,000 to 50,000.
In its last full financial year results the company made a loss of $889m (£689m).
Mr Musk’s tweeted images follow news last week that Volvo would become the first traditional vehicle manufacturer to phase out the petrol and diesel powered combustion engine, in a move toward hybrid and electric car production.