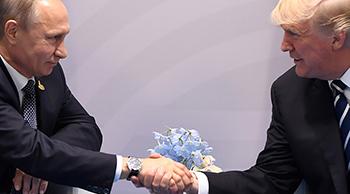 Vladimir Putin’s press secretary has dismissed claims of Donald Trump’s incompetence as “delusional trash,” and says the Russian president had a “pleasant” meeting with his US counterpart at the G20 summit in Hamburg.

“I can say with certainty that Putin was pleased after the meeting. And while I don’t personally know Donald Trump, my impression was that he was satisfied as well,” said Dmitry Peskov, who pointed out that he wasn’t personally present at the two-hour talks, but was later fully briefed by the Russian leader.
URGENT: We discussed Ukraine, Syria, cybersecurity & fighting terrorism – Putin on meeting with Trump https://t.co/vgYJTZNiqOpic.twitter.com/JY27rjy1us
— RT (@RT_com) July 7, 2017
Putin’s spokesman also launched a broadside at Trump’s portrayal in the “hysterical” mainstream media.
“Accusations that Trump is somewhat incompetent or that he is a novice, can be classified as delusional trash,” Peskov told the Russia 1 news channel. “Trump is not some simpleton. He has expert knowledge, he is a very determined negotiator and skillful at using his knowledge to put his position across.”
Putin: Trump different than on TV, we can restore relations with US https://t.co/koFkH7XA4Mpic.twitter.com/MGBJISIT7N
— RT (@RT_com) July 9, 2017
Peskov said it was “absurd” to discuss who “won” the talks in Germany, where Russia and the US agreed to a ceasefire in three zones in Syria. Putin and Trump also discussed Ukraine, cybercrime, and, of course, allegations of Russia’s meddling in last year’s US presidential election.
“We can now confidently declare that this was a win-win encounter,” said Peskov.
BREAKING: Meeting with #Putin was ‘tremendous’ – #Trumphttps://t.co/IGboLUvAdjpic.twitter.com/ToRuv0Nz40
— RT America (@RT_America) July 8, 2017
Peskov, who has been Putin’s spokesperson since 2000, added that he believes a “certain affection” had developed between the Russian leader and Trump’s wife, Melania, who sat next to the Russian president at the official G20 dinner, revealing that the two discussed several issues on the summit agenda, including gender equality and women’s economic participation.
Melania sent in to break up lengthy Putin-Trump meeting https://t.co/ck4QP7qX3wpic.twitter.com/X2Xq0MM0Jz
— RT (@RT_com) July 9, 2017