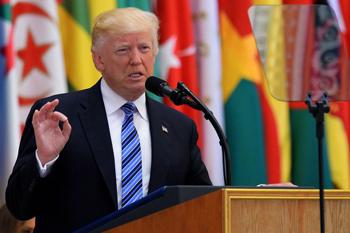 By Stephanie Baker and Sharon R Smyth
Hussain Sajwani wants the world to know he’s Donald Trump’s man in the Middle East. From his perch in Dubai, the billionaire real-estate mogul is busy working to strengthen — and promote — his relationship with the Trump Organization. And he’s making no apologies, whatever critics might say about potential conflicts for America’s first family.

“Mr. Trump getting elected definitely enhanced the profile of his organization’s brand,” he said in the London office of his company, Damac Properties Dubai Co. “Being his partner, we get a benefit.”
Sajwani has two golf-course development deals with the president’s family company in Dubai, which netted Trump as much as $10 million in 2015 and 2016, according to U.S. financial disclosures. The tie-up with Trump has transformed Sajwani from a little-known Dubai developer into someone who describes himself in press releases as “Trump’s Middle Eastern business partner.”
Sajwani says he’s sitting on $3 billion in cash and is ready to expand in Europe because Damac’s size — it has 44,000 units in the pipeline across the Middle East — makes it hard to grow at home. He’s eyeing investments in Berlin and the Spanish coastal resort of Marbella, and he’s investing 400 million pounds ($516 million) in a luxury tower rising just south of the River Thames in London that’s due to open in 2019. Trump’s anti-Muslim rhetoric and his travel ban on immigrants from several mostly Muslim countries haven’t hurt Damac, Sajwani says.
Serving Soldiers
To lead the European expansion, Damac on July 4 said it had hired Richard Choi, who had run HSBC’s real estate business in Europe and the Americas. Sajwani is searching for another site in London, and said he might announce another project this year. Britain’s decision to leave the European Union has made investment there more attractive by weakening the pound and sparking a drop in land prices. “There is more willingness on the part of sellers” to do deals, he said.
A graduate of the University of Washington in Seattle, Sajwani got his start by setting up a catering company called Global Logistics Services, which supplied U.S. troops in Kuwait and Iraq and now mostly works with oil companies in the Middle East. He parlayed that business into real estate in the early 2000s, when the Dubai government eased restrictions on property purchases by foreigners. By 2013, when Sajwani struck an agreement with Ivanka Trump for the Dubai golf course, Damac was developing the area as a luxury community he calls the emirate’s Beverly Hills.
In May, he hosted Donald Trump Jr. in Dubai to discuss the recently opened golf course with roughly 180 Trump-branded villas priced at $2 million each. Sajwani says he sells a few villas a month, paying a commission of “less than 5 percent” to the Trump Organization. There are plans for a small boutique hotel and a school attached to the golf course, all operated by Trump International. Another Trump golf course designed by Tiger Woods is due to open next year.
Scotland Excursion
After Sajwani posted a photo on Instagram showing him at lunch with Donald Jr., saying they were “discussing new ideas and innovation,” speculation surged about new deals. Sajwani says they only spoke about how to improve the Trump golf club in Dubai.
Sajwani says Eric Trump, the U.S. president’s second-eldest son, invited him to the opening of a golf course in Scotland in June, so he flew up for the day. “I don’t play golf,” he admits, but the two were able to “catch up about Dubai.”
In January, Trump handed over the management of his company to Donald Jr. and Eric, rejecting calls to divest or put his assets in a blind trust. He pledged to forgo any new contracts overseas, but said the company would press ahead with projects already in the works.
Critics have accused the president of a conflict of interest in his dealings with foreigners, saying they raise concerns that decisions might be influenced by his financial interests. Several lawsuits accuse Trump of violating the constitution by accepting payments from foreign governments and officials. While Sajwani doesn’t work for the government, he says he’s bought most of the land he’s developed, including the Trump properties, from government-controlled Dubai Holding.
Sajwani says he attended this year’s New Year’s Eve party at the Mar-a-Lago resort in Florida, where Trump praised him in a speech to guests. Less than two weeks later, Trump said he had turned down a $2 billion deal with Sajwani in Dubai to avoid the appearance of a conflict of interest. Sajwani declined to elaborate on the investments and refused to say whether he’d been in touch with Trump since his inauguration, simply chuckling when pressed on the matter.
“They’ve said they won’t do any new foreign deals,” Sajwani said, “and they’re sticking to that.”