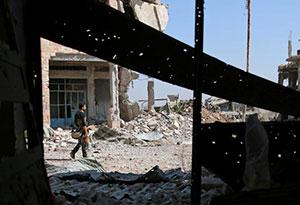 By Ellen Francis | BEIRUT
A U.S.-Russian brokered ceasefire for southwest Syria held through the day, a monitor and rebels said on Sunday, in the first peacemaking effort of the war by the U.S. government under President Donald Trump.

The United States, Russia and Jordan reached the “de-escalation agreement,” which appeared to give Trump a diplomatic achievement at his first meeting with Russian President Vladimir Putin at the G20 summit in Germany this week.
The Syrian Observatory for Human Rights, a Britain-based war monitor, said “calm prevailed” in the southwest since the truce began at noon (0900 GMT) on Sunday despite minor violations.
Combatants briefly exchanged fire in Deraa province and in Quneitra around midnight, but this “did not threaten the ceasefire,” said Observatory Director Rami Abdulrahman.
Major Issam al Rayes, spokesman of the Southern Front coalition of Western-backed rebel groups, said “a cautious calm” continued into the evening.
“The situation is relatively calm,” Suhaib al-Ruhail, a spokesman for the Alwiyat al-Furqan faction in Quneitra, said earlier.
Another rebel official, in Deraa city, said there had been no significant fighting. It was quiet on the main Manshiya front near the border with Jordan, which he said had been the site of some of the heaviest army bombing in recent weeks.
“Syrian ceasefire seems to be holding … Good!” Trump tweeted on Sunday.
A Syrian official indicated that Damascus approved of the ceasefire deal, describing the government’s silence over it as a “sign of satisfaction.”
“We welcome any step that would cease the fire and pave the way for peaceful solutions,” the government official told Reuters.
A witness in Deraa said he had not seen warplanes in the sky or heard any fighting since noon.
WAITING FOR A STRATEGY
“We negotiated a ceasefire in parts of Syria which will save lives,” Trump said in an earlier tweet on Sunday. “Now it is time to move forward in working constructively with Russia!”
A senior U.S. State Department official involved in the talks said further discussions would be necessary to decide crucial aspects of the agreement, including who will monitor its enforcement.
Russian Foreign Minister Sergei Lavrov said the truce included “securing humanitarian access and setting up contacts between the opposition in the region and a monitoring center that is being established in Jordan’s capital.”
Ahead of U.N.-based peace talks set to open on Monday, a spokesman for the opposition delegation said in Geneva the deal showed a “serious international effort to bring peace.”
“Russia has been waiting for an American strategy to crystallize vis-a-vis Syria,” said Yahya al-Aridi. “And we believe this is quite serious in part from the United States to broker such a ceasefire, and we want it to be extended to other parts of Syria, to all of it.”
Several ceasefires have crumbled, however, since the onset of the conflict.
With the help of Russian air power and Iranian-backed militias, Syrian President Bashar al-Assad’s government has put rebels at a disadvantage over the past year. The wide array of mostly Sunni rebels include jihadist factions and other groups supported by Turkey, the United States and Gulf monarchies.
Earlier talks between the United States and Russia about a “de-escalation zone” in southwest Syria covered Deraa province on the border with Jordan, nearby Sweida and Quneitra, which borders the Israeli-occupied Golan Heights.
Deraa and Quneitra are home to tens of thousands of people and form a center of the insurgency south of the Syrian capital, Damascus. Rebels said intense air strikes had pounded Deraa’s opposition territory in recent weeks.
The multi-sided Syrian conflict, which grew out of popular protests against Assad’s rule in 2011, has killed hundreds of thousands of people and created the world’s worst refugee crisis.
(Additional reporting by Suleiman al-Khalidi and Laila Bassam in Beirut, Marina Depetris and Issam Abdallah in Geneva and David Brunnstrom in Washington; Editing by Robin Pomeroy and Peter Cooney)