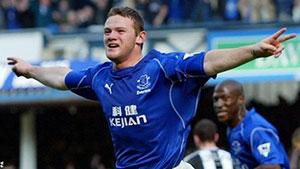 Wayne Rooney says that winning a trophy with Everton “would be the pinnacle” after rejoining them from Manchester United.
Rooney’s 13-year stint at United included five Premier League titles, three League Cups, one FA Cup, one Champions League and one Europa League.
He wants Everton to win their first major trophy since the 1995 FA Cup.
“This football club should be winning trophies and we’re taking huge steps to try to win trophies,” said Rooney.
Asked what it would mean to win silverware with Everton, Rooney added: “That would be the pinnacle because I remember the FA Cup final in 1995, I was there as a nine-year-old, and for that to be the last trophy… Everton should have won more trophies since then.”
Everton, who have spent more than £90m in the summer transfer market, have agreed a deal to acquire land in Liverpool on which to build a new £300m stadium.
Rooney, whose return to Goodison Park on a two-year contract was announced on Sunday, added: “With the new stadium in the pipeline, it’s an exciting time to be an Everton player, to be an Everton fan.
“It’s on us players to make those times even more exciting by giving them good performances and try to help them be successful and bring trophies to the club.
“I firmly believe we have the potential to be a success in the league and there are the cup competitions. We’re certainly capable of winning one of those cups.”
The 31-year-old will wear the number 10 shirt, which belonged last season to Romelu Lukaku, who is set to sign for Manchester United for an initial £75m.
Rooney is Everton’s sixth signing since the end of the 2016-17 season, when they finished seventh in the Premier League.
Three great Rooney goals for Everton
In addition to former England captain Rooney, goalkeeper Jordan Pickford, England defender Michael Keane, Netherlands midfielder Davy Klaassen and forwards Sandro Ramirez and Henry Onyekuru have also joined Everton this summer.
“Winning trophies with Everton would be the pinnacle,” said Rooney, who played 559 times for United, scoring a club record 253 goals.
“I really feel now the club is moving in the right direction, bringing the right calibre of players in. I want to be part of it and hopefully part of a successful Everton team.”
Rooney, who has 53 goals from 119 England caps, will not have long to wait before returning to Old Trafford. Everton are scheduled to visit United in the Premier League on 17 September.
‘Smart Wayne is back home’
Everton boss Ronald Koeman believes Rooney’s vast experience will be invaluable in a dressing room short of title winners.
“No-one in the team except Gareth Barry [Manchester City] and Davy Klaassen [Ajax] have won titles,” said Koeman. “Don’t forget the experience he will give to the rest of the team.
“Wayne, of course, is still competitive – he will be a competitor always – and he wants to play at the highest level that is possible for him.
Wayne Rooney goes top of England goalscoring chart
“It’s his home and he likes competition, he likes pressure.
“His main qualities are his quality on the ball, his experience and what I describe as his winning mentality.
“Everybody knows he can play out of different positions up front. He’s a smart player. He’s an experienced football player and that helps everybody.”
Two fans fall out over Rooney’s possible return to Everton.
‘I’ve been wearing Everton pyjamas for years’
Rooney said it was good to wear the Everton shirt again after 13 years in the red of United.
However, he revealed in an interview with Everton TV that he has been secretly wearing blue at home at night.
“I’ve kept it quiet for the last 13 years but I’ve actually been wearing Everton pyjamas at home with my kids,” added Rooney. “I had to keep that a bit quiet!
“Wearing the shirt feels as special as it did 13 years ago and I’m just looking forward now to getting out on the pitch with it on.”