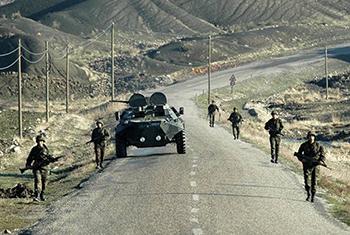 As the ceasefire agreed by Russia, the US and Jordan takes effect in southwestern Syria, people in the Quneitra province have shared their hopes of peace and normality finally prevailing. However, they fear the militants could violate the truce “every second.”

“We hope the truce will hold and peace will finally come to the whole of Syria. We here – in Khan Arnabah – are sitting together. It’s been a long time since we sat together like this,” a local resident said in a video by Ruptly.
“But one cannot trust terrorists – they сan violate the truce every hour and every second,” the man added.
A soldier said his unit is ready to “protect civilians in case any violation occurs.”
“We will respond quickly to any violation at any time. We are ready,” he added.
Another resident said he hopes the Syrian Army acts quickly against those militant groups which violate the ceasefire agreement negotiated by Russia and the US.
The truce appears to be holding so far, as no clashes have been reported since it took effect at noon Damascus time (09:00 GMT) Sunday, according to media reports, citing the rebel sources.
“The situation is relatively calm,” Suhaib al-Ruhail, a spokesman for the Alwiyat al-Furqan rebel group in the Quneitra area, said, as cited by Reuters.
The ceasefire deal and de-escalation agreement was agreed by Russia, the US, and Jordan Friday. It applies to Syrian government forces and rebel groups in the Daraa, Quneitra, and Suwayda provinces.
Russian Foreign Minister Sergey Lavrov said a suspension of hostilities will allow much needed humanitarian supplies to reach ravaged areas as well as provide an opportunity to initiate contacts with opposition groups. A monitoring center in the Jordanian capital Amman will oversee the truce.
It is also understood that Russian, American, and Jordanian forces will be dispatched to the area.