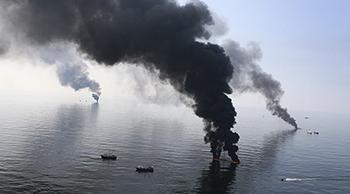 Some 71 per cent of global emissions are produced by just 100 companies, a new greenhouse gases (GHG) study has found.
In a Carbon Majors report, CDP, formerly known of the Carbon Disclosure Project, and the Climate Accountability Institute, outed many of the worst corporate offenders when it comes to pollution.
The study claims the contribution of fossil fuels to global of warming has “doubled,” while just 100 companies have caused 71 per cent of methane and carbon dioxide emissions since 1988.
“[Twenty-five] corporate and state producing entities account for 51 percent of global industrial GHG emissions. All 100 producers account for 71 percent of global industrial GHG emissions,” the report states.

Out of the 100 companies, 36 of the firms are at least partially state-owned, including Saudi Aramco, Gazprom, National Iranian Oil and Coal India. ExxonMobil, Shell, BP, Chevron, Peabody and Total are among the privately-owned companies in the report.
The CDP tracks publicly available statistics regarding methane and carbon dioxideemitted by fossil fuel producers. In some cases, the information is provided voluntarily to the project by businesses.
The report does not mention how each company may be working to reduce its environmental impact.
Fuel extraction is an increasingly worrisome business when it comes to pollution, the report states. Since 1988, more pollutants have been emitted into the atmosphere than in the previous 237 years.
“If the trend in fossil fuel extraction continues over the next 28 years as it has over the previous 28, then global average temperatures would be on course to rise around 4 degrees celsius… by the end of the century,” the report states.
Based on a 2014 environmental impact report by the Intergovernmental Panel on Climate Change, the study states that such a temperature rise would result in “substantial species extinction” and “global food scarcity.”