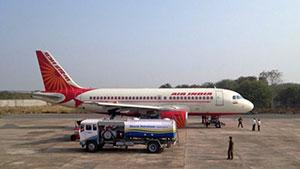 The cost-cutting measure comes as the government considers ways to privatise the debt-laden national carrier.
Critics have suggested the move is discriminatory and will make very little difference to the airline’s bottom line.
But Air India’s boss defended the move, saying he did not understand the fuss it has caused.
The issue of diet is highly politicised in India, where many Hindus are vegetarian but Muslims often eat meat.
On Tuesday, India’s highest court will look at the government’s recent decision to ban the sale through animal markets of cattle for slaughter.
And recently there have been a string of attacks on Muslims by self-styled vigilante groups who accuse their victims of transporting cow or beef products.
On Twitter, Banaglore-based chef and food writer Madhu Menon said he saw politics at play in the decision:
On his Facebook page, Air India’s chairman and managing director Ashwani Lohani said the move “reduces wastage, saves on cost, improves service and eliminates possibility of a mix up.”
He said on short flights, “the meal is just an add on and not really worthy of a major concern.”
The airline’s in-flight food options are still more generous than those found on many European and US carriers.
Passengers with budget and full-service carriers have become accustomed to paying extra for meals in economy class on domestic and shorter international flights.
However one rival, Vistara, was quick to point out that it still was offering customers a meatier option.
While the move may save Air India some money, it will have to forego many chicken or lamb meals to make a dent in its $8bn debt pile.
Last month, the government gave an “in-principle” approval to sell a stake in the airline, and formed a committee to decide how much of the airline to sell off, and whether to write off some of the airline’s debt.
The Tata Sons conglomerate and IndiGo have both expressed interest in potentially buying Air India assets.
The airline was given a $5.8bn bailout in 2012 and relies on taxpayer funds to stay afloat.