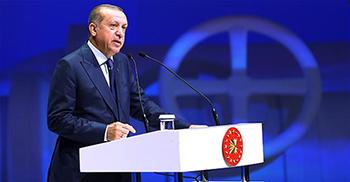 The Greek Cypriot side’s “negative attitude” against resolution efforts on the island is to blame for the recent failure of Cyprus peace talks, President Recep Tayyip Erdoğan said on July 10.

“Unfortunately, a big opportunity was missed in the Eastern Mediterranean last week. Despite the constructive approach of us and the Northern Cypriot side, we are saddened over the fact that disagreements on the island were once again left unresolved due to the negative attitude of the Greek Cypriot side,” Erdoğan said in speech at the opening ceremony of the 22nd World Petroleum Congress in Istanbul.

He also added that it was “unacceptable” that energy companies were taking part in what he called “irresponsible measures” by the Greek Cypriots.

“It is impossible to appreciate that some energy companies are acting with and becoming part of some irresponsible measures taken by the Greek Cypriots. I want to remind them they could lose a friend like Turkey,” Erdoğan said, without specifically naming any companies.

He also stressed that hydrocarbon sources in waters around Cyprus should belong to all sides on the island as a matter of international law.

“What we expect from anyone who takes sides in the developments in Cyprus is that they should refrain from steps that might pave the way for new tensions in the region,” Erdoğan said.

Speaking at the same ceremony, Prime Minister Binali Yıldırım also called on the Greek Cypriots to refrain from taking “one-sided measures” after the re-unification talks failed.

“The Greek Cypriot leadership must seek a constructive approach rather than setting up obstacles for peace. We advise them to refrain from unilateral measures in the East Mediterranean,” Yıldırım said.

“Turkey will protect its rights and the rights of the northern Cypriots to the end,” he added.

The prime minister also reiterated Ankara’s stance that the hydrocarbon resources around Cyprus belong to both sides of the Mediterranean island.

“We want to remind once again that the hydrocarbon resources around Cyprus belong to both sides,” Yıldırım said.

Talks to reunify the divided island of Cyprus collapsed in anger and recrimination in the early hours of on July 7, marking the end of a process seen as the most promising in generations to heal decades of conflict.

Ankara has accused the Greek side for the failure, saying it did not take a “constructive stance” for a solution, although the Turkish Cypriot side tried to remain constructive from the beginning.

However, the Greek Cypriots, who are due to launch gas drilling off the island in the coming weeks that Turkey opposes, pointed the finger of blame at the Turkish side.

Greek Cypriot government spokesman Nicos Christodoulides said Turkey had refused to relinquish its intervention rights on Cyprus or the presence of troops on the island.

The Eastern Mediterranean island has been divided since 1974, when a Greek Cypriot coup was followed by violence against the island’s Turks and Ankara’s intervention as a guarantor power.