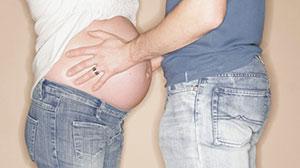 Bianca Wordley
Women have been sharing the worst things their partners have said to them while pregnant, and trust us they’re bad.

The thread on Reddit’s BabyBump forum has revealed the funny, stupid and downright insensitive things said to the women by their partners.
And while most men are supportive and loving while their partners grow a human inside of them, it seems there’s a heap that have trouble doing and saying the right things.
It all started when one woman revealed that her husband was “the king” of saying inappropriate things including: “Millions of women have had babies before you and all of them turned out okay!”
“No, they have not all turned out okay,” she wrote.
“That may have been the closest to being strangled by an angry, small pregnant lady he’s ever gotten, folks (I was already not happy because I’m upset about the tearing and stuff and this was his sad, sorry attempt at being comforting).
“Anyone else heard some idiotic lines about their pregnancy? I can’t be the only one, haha.”
And, just like that, the responses poured in.
One commentator wrote: “Me: ‘God, I look like a cow…’ DH: ‘Well, you’d bring home the blue ribbon for sure!'”
Another’s partner said: “Childbirth is so natural – I don’t know why people make such a big deal about it” and “So glad the hospital has free wifi! I’ll be able to stream the game”.
Then there was this gem: “Once we were watching something where a woman was in labour, and my husband goes ‘Why do women yell and scream so much during birth? It’s so unnecessary.”‘
Love this one: “My father to my mother as she is doing her makeup, naked, 9 months pregnant with my youngest sister: ‘It’ll be a miracle if you get anywhere close to looking like you did before.’ Spoilers: she’s 63 and has washboard abs.”
And of course there’s always those comments about your partners own pain, like this one: “My husband was at the doctor’s office getting his TDAP shot when I started labor. I texted him to let him know to come home and he wrote back ‘can you pack my bag for me?’ Uh, I am naked on the bed because I can’t stand up long enough between contractions to get dressed, no I can’t pack your bag! Then at the hospital, I’m at 8cm and waiting for my epidural and he keeps telling me his arm hurts from the shot.”
As the responses kept flooding in, the supportive comments from the other mums were priceless.
When one woman said her partner had told her to stop overreacting, this commentator wrote: “Just place one testicle of his in a vice and squeeze then tell him not to over react”.
Luckily, for most women they have loving and kind partners who have worked out it’s best to just nod and agree to everything when their partner is pregnant.