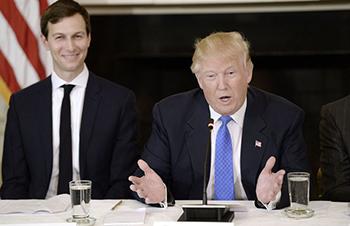 By David Kocieniewski
A few months before President Donald Trump encouraged Saudi Arabia and others to blockade Qatar, the real estate business owned by the family of his son-in-law, Jared Kushner, sought a substantial investment from one of the Gulf State country’s wealthiest and most politically influential figures, according to a spokesman for Kushner Cos.

Since at least 2015, Kushner, his father, Charlie, and other officials of the company had discussions with Sheikh Hamad bin Jassim bin Jabr Al Thani, the former prime minister of Qatar who now runs a private investment firm. The talks were about a possible cash infusion of $500 million for the Kushners’ financially challenged high rise at 666 Fifth Ave. in Manhattan. The Intercept first reported the negotiations, which were later confirmed by the Kushner spokesman.
Financial negotiations between the Kushners and a politically powerful Qatari figure like Al Thani raise concerns about a possible conflict of interest because Jared Kushner is one of the president’s closest advisers. While Kushner sold his stake in 666 Fifth Ave. to family members upon joining the administration, he still has input regarding U.S. diplomatic policy.
The two sides had tentatively agreed on a deal that would have provided Kushner Cos. $500 million in return for a stake in the building, which was slated to be renovated and expanded, but that planned investment was contingent on other financing, the Intercept reported. In March, when Chinese insurance company Anbang Insurance Group Co. ended discussions about a potential investment in 666 Fifth Ave., negotiations with Al Thani also stalled.
Al Mirqab Capital SPC, Al Thani’s company, didn’t respond to a request for comment sent outside regular business hours. James Yolles, the spokesman for Kushner Cos., said that the talks had ended “recently,” but declined to discuss details of the discussions.
In June, Saudi Arabia and a contingent of Gulf states began a punishing economic blockade on Qatar — severing diplomatic ties as well as air travel, land and sea links — a move President Trump said that he had inspired with his public call to isolate nations that fund anti-Western groups like the Muslim Brotherhood.
Trump’s harsh words against Qatar were met with skepticism by some in the diplomatic community because Saudi Arabia also funds Islamic extremist groups. The U.S. has a major military base in Qatar, so the president’s words of support for the blockade worried some U.S. military leaders.
Kushner Cos.’ attempts to partner with Al Thani, a billionaire who owns a 133-meter yacht and has vast sway in Qatari politics, are just the most recent example of the family’s efforts to bolster 666 Fifth Ave. The Kushners purchased the building for a record high price of $1.8 billion in 2007, just before the financial crisis, under financing terms so onerous that they have had to sell off some sections of the building. In 2011, the firm turned to Vornado Realty Trust to refinance the building.
According to filings by LNR partners, the loan manager, the building been losing money for three years and faces increasing loan fees. Kushner Cos. officials say that revenue decline is by design because they are hoping to reduce occupancy as they pursue plans to recast the property.
But moves by Kushner Cos. to attract new investors have led to an assortment of controversies for the family and the Trump administration. Negotiations with Anbang, which has close ties to the Chinese ruling party, ended after news reports disclosed that a proposed deal contained provisions that some real estate experts said were highly favorable to the Kushners.