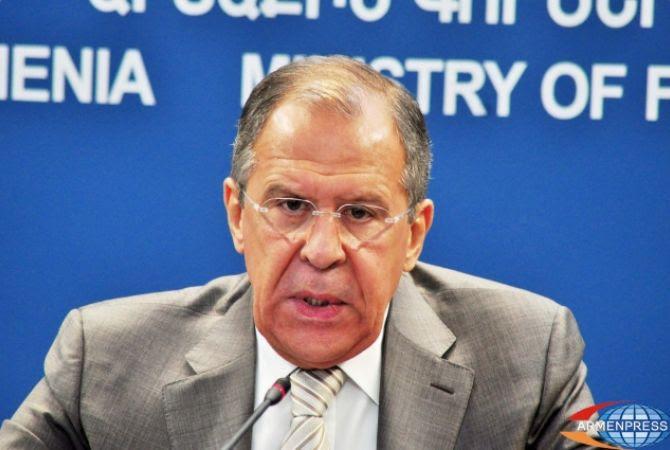 “We would single out issues of constitutional reform and fight against terrorism as key areas, although the remaining two should not be overlooked,” he said.
“A constitution is something that, in the long run, should reflect all concerns of all ethnic, religious and political groups in Syria and that is to ensure balance of interests of each of these groups,” he said, adding that this is the only way to ensure “sustainable functioning” of the Syrian state and guarantee it “from both new political crises” and from becoming “a nest of terrorist and other threats.”
The Russian top diplomat pledged that Russia will “actively support the efforts” of United National Secretary General’s Special Envoy for Syria Staffan de Mistura aiming to “stimulate the parties towards productive and constructive discussion of which constitutional reforms could be agreed.” “But until a new constitution comes into effect, Syria’s current constitution stays in place and it provides for a rather wide spectrum of possibilities to expand participation of opposition representatives in the state governance,” he noted. “I hope discussion on that topic will be constructive too as elections must always rely on the constitution, so the link between elections and the constitutional process is quite obvious.”
De-escalation zones as new possibilities
Touching on the subject of anti-terrorism efforts in the region, Lavrov expressed the hope the establishment of de-escalation zones, in particular the agreement on establishing such a zone in the south of Syria that was reached by Russia, the United States and Jordan on July 7, as well as “further such progress on three other de-escalation zones that is about to be formalized in documents in the course of the Astana process” will help fight against terrorism more efficiently.
According to the minister, de-escalation zones “create objective possibilities” as they serve as basis to separate the opposition from groups listed by the United Nations as terrorist, which the American partners have been failing to do for quite a time.
The implementation of the concept of de-escalation zones makes it possible to “normalize relations within the framework of the ceasefire between government troops and armed opposition forces” and thus “to create conditions for them to stop fighting against each other and consolidate their efforts to rebuff terrorism,” Lavrov noted.
Russia is ready to continue to promote the process of normalization of relations between the government and the opposition and support them in their joint efforts against terrorist groups, first of all, through the presence of Russia’s air force in Syria.
The seventh round of intra-Syrian talks kicked off in Geneva on Monday. It is being attended by the delegations of the Syrian government and three platforms of the Syrian opposition, namely the Cairo, Moscow and Riyadh platforms.