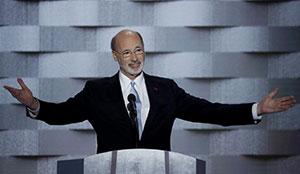 By David DeKok
Pennsylvania Governor Tom Wolf said on Monday he would allow an unbalanced budget of just under $32 billion to become law at midnight after state lawmakers failed to agree on a plan to close a $2 billion deficit.

Wolf had 10 days from June 30th to either sign or veto the legislation. He chose to let it become law automatically at midnight without his signature.
The legislature approved the spending part of the budget June 30th, beating a July 1 deadline by just hours. However, Republicans, who dominate both houses of the legislature, were unable to agree on a way to close the budget gap.
“In the coming days, it is my hope that the General Assembly will come together to pass a responsible solution to balance our books,” Wolf, a Democrat said in a statement. “There are many options available to balance the budget in the long-term.”
The fiscal 2018 budget is about $450 million larger than last year. The budget shortfall is due in large part to revenue collections this fiscal year which were $1.6 billion below expectations.
In order to close the gap, the state is considering borrowing $1 billion, to be repaid with money U.S. states still receive every year from their 1998 legal settlement with tobacco companies for health expenses.
Republicans have also discussed a wide expansion in casino gambling, and discussed but rejected placing as many as 40,000 video gambling devices around the state.
Democrats want a severance tax on oil and gas production that would feed the general fund. That idea has failed to pass in previous years.
“Every year our Commonwealth borrows money and uses accounting gimmicks to meet our obligations, digging us deeper and deeper into a hole,” said Democratic Senator Daylin Leach.
“We need new sustainable revenue just to keep the lights on and avoid yet another credit downgrade,” he said.
On July 6, S&P Global put Pennsylvania’s AA-minus credit rating on watch for potential downgrade due to budget concerns.
(Reporting By David DeKok; Editing by Daniel Bases and Andrew Hay)