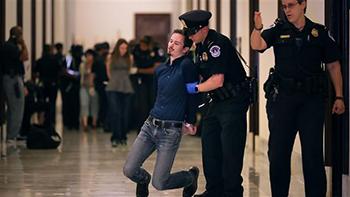 Police have arrested at least 80 demonstrators during a major protest against the Republican Party’s healthcare plans on the US Capitol in Washington, DC.
US Capitol Police confirmed the news in a statement on Monday, saying they arrested 32 men and 48 women after receiving 13 different calls about ongoing protests in various parts of the Congress building at about 2:00 pm.

Chanting “Kill the Bill,” the activists urged Republicans in both the House of Representatives and Senate to withdraw legislation aimed at repealing and replacing former President Barack Obama’s signature healthcare law, known as Obamacare.
The replacement law, dubbed American Healthcare Act (AHCA), or Trumpcare, is the brainchild of President Donald Trump and Republican lawmakers.
The protesters held signs that read “Trumpcare = death” and “Love it, improve it, Medicare for all.”
Before being encountered by police, some of the protesters made their way into the offices of a number of senators and representatives while shouting “Trumpcare has got to go.”
According to the Center for Popular Democracy, the event’s main organizer, the protesters were trained way before staging the demonstration.
“We have been training small groups of people over the past few months in the tactic of bird-dogging,” said a spokeswoman for the organization.
Republican Senator Jeff Flake of Arizona, who had no ties to the bill, said he appreciated the message protesters conveyed by seating outside of his office.
The activists also entered the office of Senator Rob Portman from Ohio, also Republican, and threatened to prevent his re-election in case the bill becomes law.
Also present at the event were a group of nurses representing the National Nurses United, the largest registered nurses union in the country, who said the bill was going to hurt their patients.
“As a nurse I am tired of seeing patients who have to struggle to pay for their medications, to pay for their hospitalizations … I don’t think people should have to struggle with that,” she said.
“It’s a death sentence for our patients,” said another nurse. “It absolutely is a moral abomination. It’s horrible, it’s going to kill people.”
According to a report by the Congressional Budget Office (CBO), the GOP plan would leave 22 million more Americans uninsured over 10 years.
Republicans have delayed the voting on the bill on Senate floor for a few times, mainly because they have failed to gather the vote needed to pass it under a slim 52-48 majority over Democrats.
At least six Republican senators have reportedly pledged to vote down the bill, while no Democrats are willing to back it up.