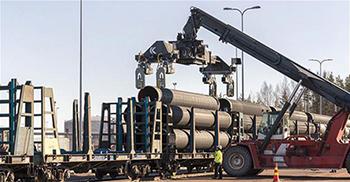 Russia on July 10 said its energy investments had suffered “sabotage” from political factors, pointing to troubles over expanding the Nord Stream pipeline that pumps gas to Germany.

Speaking at the World Petroleum Congress in Istanbul, Russian Energy Minister Alexander Novak said energy demand was set to grow in the coming years and it was essential that supplies not be hampered by politics.

But he said: “We have often in recent times encountered artificial limits on the development of infrastructure, an artificial preference for certain sources of energy and suppliers.”

He added: “We see an open sabotage of infrastructure projects… that are economically well founded and attractive for consumers, like for instance Nord Stream 2,” he said.

Novak did not expand further but the Nord Stream 2 project — which is due to ramp up the capacity of the Nord Stream pipeline from Russia to Germany — has met with hostility from some EU members.

Germany backs the project, but other EU states led by Poland are worried about dependence on Russian energy and opposed because of Moscow’s behavior in the Ukraine conflict.

Novak also indicated some states wanted to turn away from Russia’s gas reserves and nuclear power potential due to politics.

“We see a certain bias in the energy policy of some countries, who refrain from using effective and clean sources of energy like nuclear power and gas because of political considerations.”

He described this as “a continuation of protectionism which contradicts the principles of the World Trade Organization.”

“Russia is a guarantor of energy security. We see a colossal unrealized potential for cooperation and investment,” he said.

The EU wants to negotiate with Moscow over the development of Nord Stream 2, developed by Russian gas giant Gazprom and five European groups. But Gazprom believes no such negotiation is needed.

Nord Stream 2 would by 2019 double the capacity of Nord Stream 1 and allow more Russian gas to arrive directly in Germany without transiting via Ukraine.

Gazprom is the sole shareholder in the 9.5 billion euro ($10.8 billion) project while its European partners — Engie, Uniper, Wintershall, OMV and Shell — will together finance half the project.