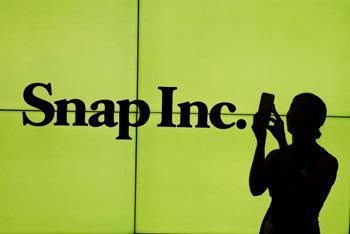 The stock fell as low as $16.95 in late afternoon trading before closing at $16.99 on the New York Stock Exchange, down 1.1 percent. The Snapchat owner’s March market debut was the hottest U.S. technology listing in years.
Earlier on Monday, Credit Suisse analysts cut their price target for Snap to $25 from $30, although they kept their “outperform” rating. The analysts said they expect Snap to be volatile in the near term as more than 700 million shares potentially come out of their lock-up period later this month.
The Snapchat messaging app is popular among people under 30 who enjoy applying bunny faces and vomiting rainbows onto their pictures. But many on Wall Street have been critical of Snap’s high valuation and slowing user growth, and the company has warned it may never become profitable.
Rival Facebook Inc’s (FB.O) Instagram in May introduced face-tracking filters, adding to its existing Snapchat-like camera and messaging features.
The IPO breach came in Snap’s 90th trading day on the public market. The stock had previously dipped to $17 in mid-June.
Snap’s low on Monday was 42.4 percent below the record high of $29.44 reached in its second day of trading.
Dipping below an IPO price is seen on Wall Street as a setback to be avoided by chief executives and their underwriters, but it is not uncommon for Silicon Valley companies. [nL1N1G919F]
Alibaba Group Holding Ltd (BABA.N) slipped under its IPO price 233 days after its stock market debut while Facebook dipped below its IPO price in its second day of trading. Facebook shares have now quadrupled from their IPO price.
Aside from Facebook, IPOs “have not done well if you hold them for a year or two,” said Trip Miller, managing partner at Gullane Capital Partners in Memphis, Tennessee.
“It could be why more and more of these companies remain private and out of the public eye. It is easier to build a company outside of the view of the public.”
(Reporting By Sinead Carew, Lewis Krauskopf and Rodrigo Campos; Editing by Steve Orlofsky and Meredith Mazzilli)