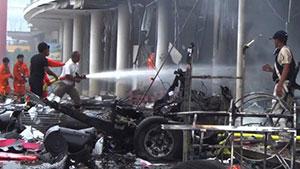 Lindsay Murdoch
Bangkok: An Australian expert on south-east Asia has warned the potential for future turbulence is high in Thailand as the country’s military entrenches its rule.

Nicholas Farrelly from the Australian National University (ANU) says a “fluid situation” in Bangkok after a coup in 2014 and the death last year of King Bhumibol Adulyadej is complicated by the potential escalation of separatist violence in southern Thailand, where more than 6500 people have been killed in a little-reported insurgency since 2004.
“The slow-burning character of the three main issues confronting Thailand – a new king, entrenched military dictatorship and a resilient insurgency – ensures that the country’s triple threat will not disappear overnight,” Dr Farrelly wrote in a paper for the Lowy Institute that was released on Tuesday.
The paper echoes growing concern about a rolling retreat to authoritarianism across the region, including in Cambodia, which has entered a vicious vortex of political violence; Malaysia where a draconian security law is back in force; and the Philippines where a popular strongman is turning a blind eye to thousands of extrajudicial killings under the guise of a drugs crackdown.
Michael Vatikiotis, a peace mediator who has lived in Asia for more than 30 years, paints a bleak picture of the future of the region of 600 million people in a new book Blood and Silk.
“I notice a distinct contrast between the Pollyann-ish Westerners all agog with the glitz and growth of the region, predicting its glorious future, and anxious south-east Asians, rich and poor, who harbour worries of lurking catastrophe,” he wrote.
Mr Vatikiotis from the Geneva-based Centre for Humanitarian Dialogue, says Indonesia risks “the kind of ethnic and religious sectarian strife we see in the Middle East today”.
He says Malaysians are dismayed by “the slow disintegration of the multiracial compact” and in Thailand there is “little prospect of the military giving up power”.
The Philippines remains a “prisoner of oligarchy” and even Noble laureate Aung San Suu Kyi has disappointed her followers in Myanmar.
Dr Farrelly, a deputy director in the Coral Bell School of Asia Pacific Affairs, College of Asia and the Pacific at ANU, wrote that these are “fretful times” in Thailand, a country long considered one of south-east Asia’s most successful.
He warned of the risk that the military, which has moved quickly to quash any dissent since toppling a democratically elected government, after months of political instability in 2014, could misjudge the popular mood.
“Millions of people in provincial Thailand still resent the unfair distribution of opportunity and prosperity,” he said.
“As economic conditions in Bangkok and the surrounding provinces have improved, those parts of the country where agriculture still makes up a significant part of the local economy have fallen behind in relative terms.”
Dr Farrelly said the military will remain eager to demonstrate its loyalty to new King Maha Vajiralongkorn and his family.
“Dissenters will continue to be harassed and arrested,” he said.
“Re-establishing democracy will be a low priority, although there will be efforts to assuage the concerns of the remaining critics from the Western liberal democracies.”
The military has promised it would allow elections at an unspecified time but a new constitution will allow the generals to dominate politics.
Dr Farrelly said future generations of Thai military commanders would continue to manage a broad portfolio of security, political, economic, cultural and strategic interests.
“Given the preponderance of authoritarian regimes across the south-east Asian region, Thailand will remain in good company among the other ASEAN states,” he said.
This report was written under restrictions of Thailand’s lese-majeste law.